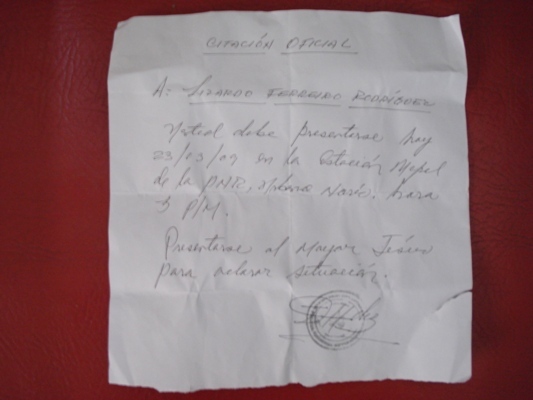 Using the defence of national sovereignty as a refuge, the secret police in Cuba are utilizing methods of repression against internal dissension that aren’t dictated by the courts, nor is their implementation in that fashion even considered in the Constitution or the Penal Code.

House arrest, detentions, and the ban on leaving or entering certain provinces are part of the low intensity repression that is practiced silently and to the beat of a policy of tyranny. With the offices of Attention to Citizen Grievances and military district attorneys at their feet, the so-called Seguridad del Estado (State Security) applies the tourniquet of improvised jurisprudence that squashes the weakest.

Ex-political prisoners like Abel López Pérez and Anderlay Guerra Blanco of Guantanamo, immediately upon their release, have been banned by Counterintelligence from leaving the first and second peripheries, respectively, of the city. Did a judge order this? Is it on their release forms? Is it a special regulation decreed only against social nonconformists? No one knows.

Two friends of mine, jurists of officialdom, who went to school with me back at the University of Oriente in Santiago de Cuba say yes, that it’s a violation, but “the powers acquiesce to manu militari“. I’ve asked many dissidents across the island up until now if they’ve ever been presented with an order of detention signed by a judge and they’ve said no. Never. The same goes for the issued extent of the official summons, which is applied verbally or on some little scrap of paper that won’t appear in any file. If the summoned refuses, then he or she is automatically detained, but his or her name will never appear in the police station’s registry as a detained person. To the eyes of the statistics that could serve as a report, that person was never there. That’s just how complicated the Cuban judicial system is.

The provincial-level military district attorneys receive the complaints against their colleagues with reluctance, and even more when they’re on behalf of peaceful dissidents. The offices of “Attention to The Populace” have a wretched mechanism for the receipt of the grievance, notice of investigation, and results thereof, that makes even the greatest optimist give up on the complaint process.

Before such judicial neglect, few dare to play that diabolical game of chess where the secret police fancies itself a supreme God in order to move white and black pieces alike on the same turn.

And that’s how checkmate is declared upon the Constitution.