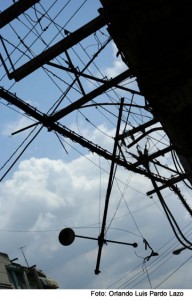 The radio I got for my last birthday rests on a bookshelf, covered in dust. Because if I turn it on I can barely hear a thing. Not even the national broadcasts can be heard well in this area full of government ministries and the antennas they use to block the shortwave broadcasts that come into the country. I had the illusion I would be able to listen to Deutsche Welle to keep my German language alive, but instead of the hoped-for “Guten Tag” all that comes out of the speaker is a buzzing noise.

We live in the midst of a real war of radio frequencies on this Island. On one side we have the broadcasts of the station called Radio Martí — banned, but very popular among my compatriots, they are transmitted from the United States — and on the other side the buzzing they use to silence it. The radio receivers sold in the official stores have had the module that allows you to hear these transmissions removed, and the police are in the habit of searching the roofs for the devices that help to better capture these signals.

Meanwhile, inside their houses, people look for the place — it could be a corner, near a window, or stuck to the ceiling — where the radio manages to ignore the annoying beeping of the interference. It is common to see someone lying on the floor while they locate the exact point where local programming is overshadowed by what comes from abroad. It doesn’t matter what they’re sending from the other shore, whether it’s a boring musical program, the news in English, or a weather report from somewhere else in the world. What matters is that it is a balm for the ears, that it sounds different, that it is something other than that mix of slogans and prose without freedom that is transmitted daily on Cuban radio.