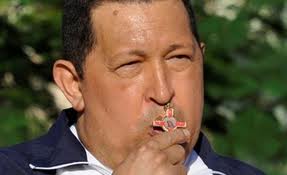 Venezuelan President Hugo Chavez Frias announced that he will again have surgery for malignant cancerous cells found in in medical check up performed in Cuba.

Chavez commented that he is having problems that are preventing him from fulfilling his presidential duties, counseling the Venezuelan people that there may be new elections to choose a new president. “Vote for Maduro,” Chavez said.

Tomas Gonzalez, 65, says, “Now we see the desperation of the government, when I saw them interrupt the broadcast I thought something serious had happened in Cuba but it was Chavez crying for a miracle. He also emphasized that, “Sadly, this is a hard fight, to keep the cancer from winning, it is another surgery and possibly the last. It reminds me of the song by the group “Queen” when they declare they have AIDS and could die at any moment,” Gonzalez said.

Pedro Lopez, 49, commented that president Hugo Chavez has confidence in Cuban doctors and that they might be able to save his life. “But there are better specialists in the world but he would be afraid to receive medical care from an “enemy”, a completely crazy aberration.”

Lopez comments that the situation could become even more difficult. “Venezuela is the principle source of Cuba’s oil and if Chavez dies we Cubans could experience blackouts all over again.” Of even more concern is a new “Special Period.”