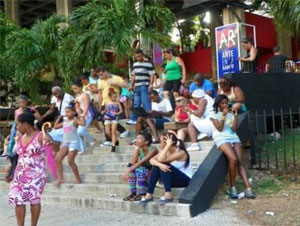 Primavera Digital, Eduardo Martínez Rodríguez, El Cerro, Havana, 22 November 2017 —If in Cuba we were to change everything that needs changing, we would have to rewrite our constitution. Why? Because of the many absurdities that do not permit the economy, nor society, to advance towards development, as do almost all the other nations on the planet—and all for protecting the spurious interests of a small clique that clings to power by virtue of no other legitimacy anymore than sheer force.

The government assures us that it desires a highly developed society, but this can only happen if there is a developed economy. How can this be achieved? By doing everything possible to incentivize development, and that is not how it’s done in Cuba.

In Cuba there is no store that sells tractors, trucks, farm equipment, or any other tools for the private farmers, who in fact comprise the immense majority (and the few outstandingly efficient members) of the agricultural sector. No big stores, nor small ones, either, offer agricultural supplies. The farmers are used to getting from the national or local government whatever they supposedly need for their work, such as the so-called technological packets, etc. But unfortunately our Ministry of Agriculture and subordinate agencies are staffed by “office farmers” who only know the type of agriculture that provides for our dinner table. And so it is in the rest of our ministries.

They supposedly want to incentivize private labor but unjust, un-payable and exorbitant taxes are imposed that we expect will function as they do in the US—but in a socialist system where the People (in reality the State) own the means of production, raw materials, all the unrealized gains, and all the income and aggregate value. In real terms these taxes function as an amortization of the chronic inefficiencies of the State.

They want the transportation system to get better but they don’t sell new or secondhand vehicles at a just and reasonable price. Nor is bank financing available. They don’t allow individuals to import from abroad, forcing us to continue to rebuild as best we can cars that are 60 or more years old.

They require that private transports be in excellent working condition when there is no State-run garage to take them to for maintenance and repair, no replacement parts provided or for sale, and the few other supplies that make it to the stores, such as batteries, tires and such, end up with astronomical price tags.

They pay lip service to bettering the standard of living while paying miserable salaries at the level of 30 years ago, and prices are, by decree, increased by 270% for sale in the hard-currency stores owned by the military.

They speak of civil society and impede oppositional movements. Our nation is ruled by very veteran military commanders, and even our low-level civilian functionaries now also sport the olive green, apparently as a fashion statement.

They wish for the nation to inhabit the Information Age when there is not a single store in the land that sells computers, while ETECSA, the state telecommunications and Internet monopoly–the only such entity allowed to operate–works very slowly in installing these new technologies despite being able to do it much more speedily.

They come out for improving education while the overwhelming majority of schools are in bad shape or lack adequate conditions for their proper functioning. Many resources are scarce and the professors make, as do all the workers in the country, on paltry salaries, unjust and abusive.

We try to be a medical power when there are not enough available doctors because of their exportation to the Third World, while our pharmacies are increasingly lacking medications to the point that we are approaching catastrophe for the elderly with their minuscule pensions. Meanwhile the black market for legal drugs at high prices continues to grow, for even aspirin is hard to find. To be admitted to the hospital today is a misfortune, not a solution, for the patient. New infections that cannot be controlled are breeding because of dire sanitary conditions.

They appear to try to instill in our young people our traditions and culture when our media, especially television, is increasingly and unpleasantly politicized and all our national symbols are manipulated to a disagreeable and degrading degree of chauvinism. Meanwhile our texts and the programming on offer are ever worsening in quality to the point that the citizenry seeks and finds alternatives such as pirated cable and the celebrated “weekly packet” that even the government tries to imitate with no luck, for it doesn’t change its methods.

The ancient bosses try to reach out to the youth with their speeches when they don’t see, don’t grasp—due to their advanced age—that young people must be approached via their evermore efficient and personal technological resources. Social media is being extensively used in politics (Donald Trump has more than 22 million followers on Twitter) while in Cuba there is still not even the possibility of accessing the Internet at home and apparently it will not be for along time by design of these same bosses.

They want the populace to make money but then we are publicly scandalized when some entrepreneur starts to do so.

They don’t allow the creation, for example, of associations or organizations of independent accountants for private or State-run enterprises. To speak of independent lawyers is subversive.

They authorize private manual labor when there are no supplies: there are carpenters without wood, welders without acetylene and oxygen tanks, etc. Even many years after the supposed opening the much desired wholesale market is still not in existence while the State enterprises do have one and even so they work very poorly.

Private businesses are not allowed to import what they need, and hard currency for foreign travel is not sold under any circumstances.

They change their tune constantly and this confuses the local ideologues and the populace. What’s all this noise about creating one, two, many Vietnams when Raúl Castro has declared a peace zone in Latin America? What about religion being “the opiate of the masses” versus Liberation Theology? Stalin was once a great man and now is a butcher. Fidel previously tried to get Nikita Khrushchev to fire the nuclear missiles but now he had nothing to do with it.

They want our children to be like Che when we should want them to be like Martí.

They want development but without anybody making money, betterment but we know not how, change but not too much of it.