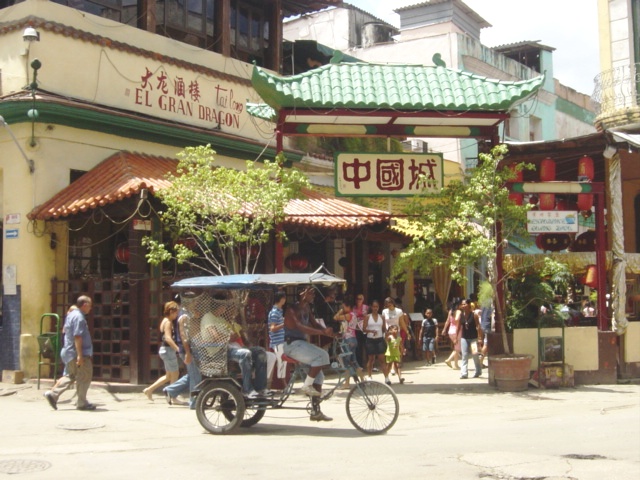 In every self-respecting city there is a Chinatown. Havana is one of those. The Chinese are the largest population on the planet. If to the 1.3 billion people living in mainland China we added those scattered around half the world, the figure may exceed 1.5 billion.

They arrived in Cuba in the mid 19th century, fleeing war and misery. Most came from Canton and emigrated as cheap manual labour on the sugar plantations. They did the toughest work. Little by little they were lifting their heads and opening chinchales (illegal tobacco workshops). In addition to selling fritters, they were setting up dry-cleaners or opening a restaurant in a neighborhood of Havana or elsewhere on the island.

During the war of independence against Spain in 1868, the Chinese also took up the machete. And they certainly did it well. On the corner of L street and Línea, Vedado, almost kissing the Malecón, stands an obelisk to the Chinese who fought against the Spanish troops. In the words of the inscription, there was not one Chinese Cuban defector nor traitor.

Very few became fluent in Spanish. Their frugal lifestyle provoked ridicule from the Cubans – well known for wastefulness. They were mainly located, and still are, within the area bounded by Zanja, Dragones, Rayo and San Nicolás streets, in Central Havana.

There they had shops, cafes, cinemas and theatres like The Shanghai, at the time considered as ‘relaxed ‘ (pornographic). They also had associations where in the afternoon they practiced martial arts or worshipped their deities. On hot nights, between rice wine and mouthfuls of opium, they played Mah Jong in silence.

After the arrival of the bearded ones to power, the Chinese, along with the Cubans, Spanish and other foreigners, had their businesses expropriated. That was during the olive green offensive of 1968, a copy of the collectivisation carried out by Mao Zedong on the other side of the world. Many decided to leave and settle in the United States.

In the 90’s, when the USSR bade farewell to its exotic doctrine, China invented a bicephalous system of two ideologies and one nation. At a stroke, with a market economy and factories, they became the number one manufacturer of the planet. In the absence of rubles and Russian oil, Fidel Castro had no choice but to move his pieces.

It was during this stage of timid liberalisation that Eusebio Leal, the city historian, and the Embassy of the People’s Republic of China, concluded an agreement to allow Chinese descendants to create culinary entities.

They are able to operate autonomously. Without the jealous eye of the state — a kind of bull in the china shop — Havana’s Chinatown began to flourish. Now is the best place to eat in the capital.

The old Chinese restaurants have been converted. Comfortable and with air-conditioning, the menus offer dishes like fried rice, chop suey and spring rolls. In the absence of an Italian neighborhood, they also sell pizzas, spaghetti and cannelloni. And local Creole food: rice and black beans, roast pork and yuca con mojo.

Yes, you eat well in today’s Chinatown in Havana. The bad news is when it’s time to pay. A dinner for four people costs about $50, five times the minimum monthly wage of a Cuban worker. Unlike the food offered in Chinatowns in other countries, which are economically priced, that of the Cuban capital is a luxury. Those who can, go on special occasions such as Mother’s Day or family birthdays.

Never was it so expensive to eat Chinese food in Cuba. Gone are those cafes on Monte, Belascoaín, Infanta and other streets in downtown Havana, where 3 Pesos was enough for a plentiful serving of fried rice with shrimp, chicken and ham among other ingredients, and Chinese vegetable soup.

Now Chinese children and grandchildren do not sell fruit ice-creams nor wash and iron clothes. They do not need to. Today they are managers of restaurants or companies and live in style. In this peculiar neighborhood in Havana, supply and demand works. In most premises they will charge a 10% tax for a dinner. The current generation is much smarter than their parents and grandparents.