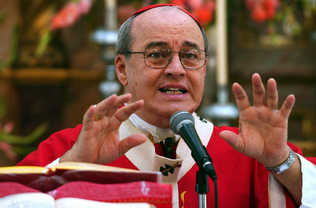 I have no words to describe the recent statements made by his Eminence Cardinal and Archbishop of Havana Jaime Lucas Ortega Alamino during his stay last week in the United States of America.

Those who have followed each of the press releases that mention in one way or another the statements of the highest Cuban authority within the Catholic Church, have noticed that despite the fact that he has spoken in a deliberate tone, the language used by the Cuban cardinal places at disadvantage the credibility of the good function of the Catholic hierarchy in the island. He has repeated in his discourse the same phrases used by the ruling class.

All of us who follow the evolution of the Catholic Church in Cuba, have denounced on many  occasions the so badly called relationship between Church and State, and the complicity of the Church with the silence of the true existing situation in the island related to the lack of a state of rights and also the lack of places for free religious worship.

Maybe for many people the last two visits of the Popes to the island are more than enough, if we would add some minutes on domestic television, or the last tour of the pilgrimage of the Virgin, to show the world the false freedom of worship in Cuba.

Today’s comment does not attempt to criticize the role of the Church in Cuba, but it tries to put in its right place he who uses the Catholic Church for his own benefit and in defense of those who are sinking the nation into an increasing poverty.

Today I want to use this article or comment as a pulpit, and from it denounce the words of someone who does not deserve to wear the purple color used by martyrs of the Christian faith. The last words spoken by Jaime Lucas Ortega y Alamino, on April 24th during his mediation at the Church and Community Forum sponsored by the David Rockefeller Center of Latin American Studies of Harvard University in Cambridge, Massachusetts. As many have judged, his speech was similar to one of the many speeches dictated by the office of the Department of Ideology of the Central Committee of the Communist Party of Cuba.

We would have to ask such a Cuban Cardinal, “How could he have access to the police records of each person who occupied the Caridad Church in Havana?” We would also ask, “How could he obtain the information that such acts of civil disobedience were organized from Miami?” I understand this time, like many other times, that the Cardinal spoke more than he should, and now he has to withstand all the critics coming from different latitudes.

I never imagined to hear, from the lips of the highest pastor of the Cuban Church, so much malice for those who try to promote full respect to the basic freedom of each man. To call those who serve unfair sentences under the most terrible conditions not described by people like him “common delinquents,” at some international meeting, makes him an accomplice of a corrupt and inert government.

We would have to ask Jaime, “How would he feel if we call him delinquent because of the fact he was sentenced to compulsory work during the years of UMAP* together with many other priests and religious people who practiced faith?”

I am a true catholic, I love the faith of the church, I love my motherland and the freedom experienced in the abandonment of each of our vicissitudes on the shoulders of Jesus who deserves to be called The Greatest Man of All Times. But every time I face situations like the ones today, by means of which the judgment of the world is focused on the behavior of the Catholic hierarchy on the island,  I see myself with the obligation to ask that the whole Cuban clergy not be judged for the behavior of him whom I dare to name the Cardinal Puppet of Castros Brothers.

It is my wish that there be a new awakening of the Christian faith in a Cuba free from stereotypes and obsolete dogma which place next to the ruling class those who have to walk next to the poorest people. It is my wish that the body of the Cuban church receives a transfusion of young blood with a new zest for life and who will promote a new nation where  true patriotic and Christian values are practiced.

For today I say goodbye to someone who does not deserve to be called Cardinal and even less Cuban, people like him should be sentenced to forgetfulness or, it would be better to say, to be sentenced to carry the weight of the disgraceful history that only he using his high position has invented, only God knows, and his terrestrial accomplices for in exchange for benefits.

*Note: UMAP = Military Units in Aid of Production, a series of concentration camps for religious believers, homosexuals, and others who ran afoul of the Castro regime. Cardinal Ortega was interned in a UMAP camp when he was younger.