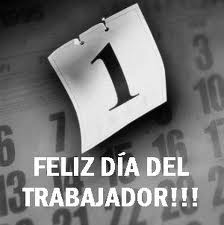 The propaganda has begun for participation on May Day, no one is forced to go, they’ve said for a lifetime, but this is not the reality. For not only are those belonging to the Cuban Communist Party forced to participate, but they are told so in the bureaucratic meetings they have every month.

It seems that this year the orders were quite desperate, because it has come to the ears of many Cubans that everyone in the nuclear family has to go, with the exception of older people who would have difficulty with this marathon.
In the early 90’s, since the beginning of the Cuban dissatisfaction does not say directly that you have to go, but dropped to two-way action that makes you think that you will achieve faster journey of “Barrio Adentro”, provide international health services or a job title.

In the early ’90s, when Cubans began to be dissatisfied, they didn’t say directly that you had to go, but they let drop that with such activities you had to think about being able to achieve, more quickly, a “Barrio Adentro” assignment, that is traveling abroad to provide health services internationally, or for some similar post.

The point of the march is to show the worlds that Cubans feel fine, there’s no desperation, no dissatisfaction with the government, no hunger, and that all we Cubans here who are trying to get the government to change the form of the government — or to bring it down — are painted as liars, defamers, or mercenaries supporting the interests of the government of Barack Obama.

That day I sit to observe the number of people who attend the May Day events, but not counting students, they don’t go for the significance of the day but to amuse themselves, get sweaty, tire themselves out and other obligations they have for belonging to organizations such as the OPJM (José Martí Pioneers Organization), FEEM (Federation of High School Student) and the UJC (Young Communist League).