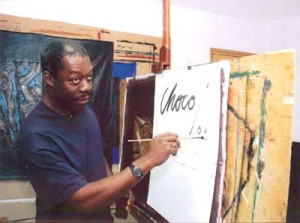 The Villa Manuela Gallery extended until the end of November the exhibition Beyond the border, of the painter and engraver Eduardo Roca Salazar (Choco), who according to N. Echevarria, “returns to drawing and even makes a foray into three dimensionality through a set of “sculptured” figures, the inclusion of “Choir” (2010), anchored in earlier works, in which collagraphy forms a structural axis.”

Choco, like Fabelo, Medive or Sosabravo is an artist with his own style and identity, indeed quite oversized. He belongs to the generation of the seventies and studied at the School of Art Instructors and the National Art School, which, combined with his talent and hard work opened institutional spaces within and outside the island.

His resume includes prizes, citations and awards for his prints in exhibitions in Bulgaria, Cuba, Spain and Japan; personal and collective exhibitions in and beyond our island, and works in collections of museums and art institutes in Havana, Chicago, Mexico, Palma de Mallorca, Tama, Kochi (Japan) and Germany.

Human representation is at the center of the eleven pieces that Choco displays, which plunges us into the imaginary intimacy of dark syncretic faces, reaffirmed in earth tones, natural sienna, black and white as a contrast. Their faces and asymmetric bodies — male, female or hybrids — seem to say that beauty is in the information and the artistic sense, highlighted by the relationship between figure and background.

Although Choco studied painting and triumphed with his prints, years ago he showed a preference for collagraphy and sculptures of glued paper, which require perseverance, craft, and a love of manual meticulousness, enriched by the composition and the work of color in each offering, whose corporeality and expression infers eroticism and vitality.

His geometric symbolism in “Reflejos” (2004-2010), made up of four medium-sized pieces of mixed media, appears as if looking through glass, not water. In these profiles can be seen traces of African features, palpable in a previous series of great visual intensity, such as the sculptures “Juegos de Cabeza” and “Bemba Colora”, tied to the ethnic origin of the creator.

The sculpture “Abrazos” (glued paper of 158 by 40 and 22 cm), asymmetric and symbolic, demonstrates mastery of the body and offers readings that break from the sensuality and texture of the piece; while in “La Siesta”, a work of background and figure, the color and technique enhance the expression, enriched by stripes, lines and numerical indications that hint at hidden messages.

In mixed-media creations such as “Beyond the Border “, “The Wall That Surrounds Us”, “Silence” and “Torso”, Choco demonstrates his figurative mastery in the exploration of the tactile, addressed in a number of sculptures, prints and collagraphs that travel from lyricism to a subtle everyday intimacy, but evade other realities. 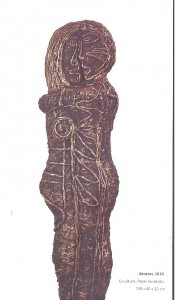 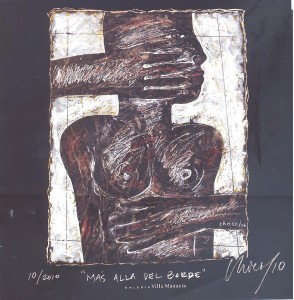