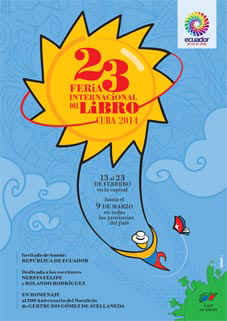 Behind the shelves there is another International Book Fair. One barely perceived among the partitions and walls of the exhibition areas. The national newspapers will never report on it, but these parallel and hidden events sustain the other one. A network of hardship, endless workdays and poverty-level wages, support the main publishing showcase on the island. For each page printed, there is a long list of irregularities, improvisations and exploitations.

The Cuban Book Institute (ICL) is the principal organizer of this celebration of reading that is held every February. However, the state entity that controls literary production is overwhelmed by the lack of resources and corruption scandals. Its director, Zuleica Romay, asked to step down weeks before the start of the book fair. However, it’s still unknown if she will be granted “liberation” from her responsibilities, or will “follow her duty” to maintain her position.

Many of the people who worked on this twenty-third edition of the Fair played the role of the ants who prevent the collapse of the anthill. The “credits” chalked on the Cuban government’s account are the fruit of personal sacrifices and violations that no union would demand: lunches delayed or missed completely, editorial decisions that can’t be taken because first “you have to consult the comrade from State Security,” workers who bring resources from their own homes to decorate the place, books that travel in the trunk of a private car — or in the basket of a bike — a lack of institutional gasoline and water supply that never makes it to the mouths of the thirsty employees…