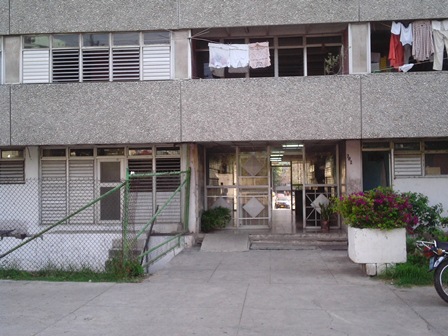 I am reading The Book of Laughter and Forgetting by Milan Kundera. The first time the book showed up (the expression seems fantastical, but in Cuba that is how one gets these books), I was washing diapers. I preferred to read it and laugh quietly in the early morning so as not to wake up my baby instead of passing it on. For me Slowness was a good introduction to Kundera’s world. These books were widely believed to be forbidden, but many people read them anyway, even those who distanced themselves from the masses. Perhaps years ago this book was indeed being confiscated. An old work colleague once found me reading a book by Carlos Alberto Montaner (during working hours, no less!), and out of genuine concern suggested that I cover it up and hide it because “they can arrest you for that.”

I still don’t know if anyone was jailed for reading, but in fact there was a belief in a right to detain us for having an independent library and for organizing activities. During the Dark Spring, practicing journalism or independently collecting information carried a twenty-five year sentence.

The Communist monarchs felt the same impulse as the Chinese emperor who carried out a transcendental book burning from which The Book of Mutations miraculously escaped.

But what inspired me to write this post was a point of discrepancy in my reading of the author which made me think that, in a totalitarian system (or post-totalitarian, as Havel would have it), all disobedient citizens could be suffering. According to Kundera, “in the files of the police archives lies our only immortality.”

I do not agree. There are many times that I hang up the phone bothered, not frightened, at the thought that others could be listening in. Besides the disgust at imagining the violation of privacy to which we all have a right, however, I am bothered by the thought that what I say will be interpreted by people who do not know me, or who are trying to pigeonhole me. I cannot be simply this pigeonholed dossier. If only they could at least understand the complexity in being human, they would become it themselves.

When human beings give a speech – the most innocent or the most cautious – and are sincere, they have respect for the silences between sentences. It is not necessary to say everything, and I am fascinated by what is said between the lines. I have read somewhere  that this is where truth lies – in the emptiness between words. It is clear that this is something a communist cannot understand, nor a person who abhors his own freedom. There are instances when a person cannot understand everything, or cannot mention everything. According to a poet out of Origins this is the ideal state for poetry, much like that by the Delphic Oracle: ...an I-don’t-know-what behind their stammering.**

The night should seem like any other night anywhere else on the planet, but the first sounds of morning return to disillusion us. “You are in Cuba.” The resemblance was a mirage because neither by night nor by day do those who prop up the inspector’s stage set rest. One way to rebel is to prove that, just as a weed keeps growing, nothing can deprive us of the infinite subjectivity of our existence.

In the dark night of my terrors, (like the mule who launched deep-seated questions in his eyes), who knows if I’m given to ask who Is and whether in the Kingdom the nostalgia and chiaroscuro of poetry will remain.

**The last line of Stanza 7 of St. John of the Cross’s poem The Spiritual Canticle.