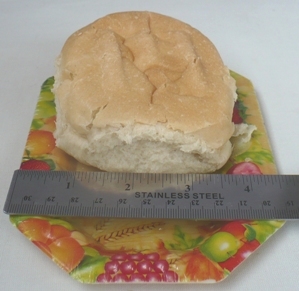 It should be done with wheat flour, but is often reinvented with sweet potato starch, is supposed to have grease, but it’s missing in the recipe, and salt, but because it causes the modified dough to collapse nobody uses it: the result is the anti-bread — one a day — which is the quota assigned to Cubans by the imposed rationing card.

With its ugly appearance of a Middle Ages crust of bread, in “the middle” of the stench and unhealthiness, the bread is one of the areas where the government timeservers show their contempt towards the people. It is the pandemonium of the underestimation and disrespect of cuban society. If you try to eat it the day after, most probably you will have two obnoxious experiences. The first one is that for sure you will have to pinch your nose or hold your breath to ignore its acrid smell, and second, you may chip a tooth in the process. The acridity is because it is made with bad quality yeast and because it has too much water added to ensure the proper weight just in case an inspector “shows up”, he won’t be able to verify the ingredients adulteration — in which case ‘the dough’ to silence him would rise;  the hardness, because the lack of grease in it. In addition you have to bring your own bag to buy your bread, the employee snatches the pen from behind his ear to write in your rationing card the one and only bun that you are entitled to buy for that day. He takes your money, shakes hands with all the people who greets him, swipes the sweat from his forehead and then, he serves your bread using his bare hands (without using tongs or gloves) and without washing them.

A few years ago the State made an important investment in modern bakery technologies acquired overseas. In that chain of bakeries the bread is more expensive — ten Cuban pesos a pound — and in the beginnings the quality was noticeably better; but now days it is almost as bad as that for sale in the bodegas but the price didn’t drop as the quality did.

On many occasions and because of consumer complaints, the TV news did on-site interviews with the managers of such bakeries, they had been questioned about the production failures and urged to make public statements promising the solution to these and other problems. But the media news involvement has not been effective and the result is the same: the anti-bread.

The core of the problem is systemic and happens because the lack of control, the low salaries and the dearth of civic awareness provoked by the “grab whatever you can” way of life brought by the deceptive concept of the social property, because it is very well known that the Cubans are not allowed to own any kind of real estate. The local small leadership is struggling to survive when there’s no choice: either survive taking the “bread” home to sustain their families, joining the generalized corruption and unlawful activities, or live a poorish life in the legality of a virtual Cuba outlined by the only party and its unsuccessful government model.

Those who like to invent trash, or to reform what is already invented and works well, have to be reminded of that old Cuban saying: “It’s better to copy from something good than to create something bad”. We, the Cubans of the generations after 1959, could never be accused of being copycats.