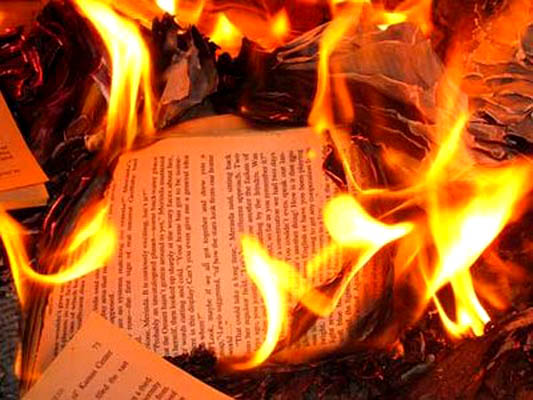 In the early ’90s, the Reverend Rolf Rasmussen, minister of the Asane Church in Bergen, Norway, received an unexpected telephone call on Christmas eve. A mob of “Black Metal” music fanatics with clear satanic affiliations had set fire to his two-hundred year old church and reduced it to cinders and ashes.

The fact that no one died in the incident was a true miracle.

The testimony of Rasmussen was collected in a fantastic documentary by Sam Dunn and Scott McFayden about the history of Heavy Metal titles, “A Headbanger’s Journey.”

I think about it now that the incendiary torch has changed hands, and he who wields it doesn’t play the guitar or worship Satan. Rather it is presented as the continuation of the Christian word.

Personally, I see no difference between the barbaric acts carried out by the Norwegian rockers, and the show that is put on by the protestant minister Terry Jones, burning a copy of the Koran in his sacristy in Gainesville, Florida, careening new souls to his Lord.

Strictly speaking, it’s not the same. It’s much worse. The acts of those dark musicians only damaged the architectural patrimony of Norway, while the burning of the Islamic sacred text has caused, so far, some twenty deaths and numerous injuries in Afghanistan.

It was common knowledge. Mr. Terry Jones can not claim surprise. When he announced his intention to burn the Koran commemorating the September 11, 2010, the international and internal uproar seemed to make him desist from his crazy action.

But last March 20 he “condemned” the book in a symbolic trial, and presided over the cremation ceremony. A few days later, an angry mob broke into the UN office in Mazar-i-Sharif, Afghanistan, and ended the lives of seven innocent officials. In the days that followed, the protests have ended the lives of many more people.

Some analysts focus their attention on the overreactions of the Muslim fanatics, who haven’t even adhered to the instructions of Sharia, and the Supreme Law, making an “Eye for an Eye, a Tooth for a Tooth,” perhaps charring some edition of the Bible.

For me, it’s no more than stating the obvious. To censure the extremism of a handful of fanatics (calculating the handful: close to 1.5 billion people in the world profess Islam, and only this Afghan mob took justice into their own hands), is as futile as it is repetitive. We can count on that.

But the extreme irrationality of a westerner based on the words of a peaceful God, and living in one of the most plural and tolerant societies on the planet, is truly astounding and troubling.

Now, the arguments of Pastor Jones are the most interesting part of this unfortunate scene. He has said, “No one can stop me from expressing myself freely. The burning of a book is a form of self-expression, guaranteed under the First Amendment to the U.S. Constitution.”

No legal entity, government or religious, could stop this from happening, for a reason like a temple: in a country where freedom of expression is an untouchable concept, there is no way to stop an act like this, provocative as it comes, but harmless materially speaking: burning a book. It is not a human being, nor even a pet.

In democratic societies, respect for individual liberties, however controversial or objectionable they may be, is sacred. And the cause of this sacred respect rests on a humanist foundation: confidence in the ethics and good behavior of civilized citizens.

Should this right to expression be amended again, as a notable Muslim political analyst in the United States has suggested, in hopes of safeguarding security and keeping the peace?

And, with pain in my heart for the victims of this fatal act, and with anger awakened in me by this caveman-like conduct of the Christian Terry Jones, I say no. I say that the circumstantial modification of a section like this could be a gray precedent such that, in the future and with other interests in play, new modifications would begin to mutilate the freedom of expression that, speaking frankly, is strict or it does not exist.

Not even the shocking reaction of a group of blind fanatics, not even the anomalous conduct of a priest — whose action seems equally fanatic to me, though he does not wear a turban nor proclaim jihad, nor listen to heavy metal — should determine this crowning achievement of democracy that is expressed with true freedom.

The infamous Terry Jones carries in his consciousness the bitter weight of their dead, and those of us who assume  freedom of expression as a supreme commitment, are comforted by knowing that nobody, not even for worthy causes, can cut off that right.

That’s right: What I wouldn’t have done to have had the services of Mr. Jones (having been Catholic) as the pastor of that church burned in Bergen, Norway, twenty years ago. I would have been delighted if the midnight call received by the good Rasmussen, he had taken it.

Perhaps those innocent people in Afghanistan would still be alive today.