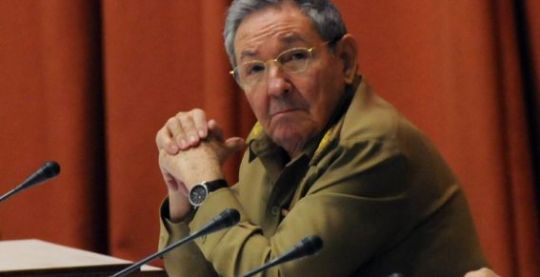 Jeovany Jimenez Vega, 29 May 2017 —  Yes, General, on this point I entirely agree with you: “The enemy uses ever more sophisticated information weapons”. He clearly is the enemy; the one who stubbornly opposes all my people’s progress; the one who brazenly deprives them of their rights; who obliges them to live in misery; who lies to them with empty slogans, and without any sign of embarrassment, who embezzles their resources and squanders them on sectarian whims; who forcefully suppresses dissident voices, and who stoops to the vileness of dragging and hitting defenceless women without even respecting his own laws.

Thanks to terror enforced by brutality, firing squad and prison, these accomplished villains managed to take all the levers of power from the beginning of the 60’s, ending up ruining a country intended by nature to be prosperous, and today we can see how these awful people are sharing out what they have looted from my country.

Those terrible enemies of my people, General — used to their monopoly of lies — are the ones who  tremble with fear when light is thrown on the truth. But when things change — not thanks to them, but in spite of them — and there is something called progress and something inherent in human nature called free will, neologisms have appeared which don’t fit with absolutist jargon — words unintelligible to them, unpronounciable in the mouth of an enslaved people. Fully accessible, uncensored internet? OMG! Freedom of the press, freedom of assembly and association? Never! Among other licentiousness permitted by that cruel international capitalism which  surrounds us.

Because of the egotism, paranoia, cowardliness and stiffening of the mental joints on the part of those public enemies you mention, my country has just seen a string of excellent opportunities pass it by, offered by a North American president who broke with the approach of all his predecessors. Therefore, we can see how those same immoral people who yesterday barricaded themselves in, aluding to non-existent sirens of war, today climb back into the same trenches, hiding from the pipe of peace. When, in their arrogance, they decline to similarly hold out their hand, they show themselves once more to be against my people, like the incorrigible opportunists they have always been.

It’s precisely because of the pigheadedness of these enemy nonentities sitting in judgement over the Cuban people, General, that half of our harvests are still left to rot before they get to our tables, that a significant part of our fields continue to be covered by African marabú (a plant which is widespread in Cuba and seen as an intrusive pest) and another unjustifiable percentage left uncultivated while my country unnecessarily imports more than 1,700 million dollars worth of food a year – including, incredibly, part of its sugar requirement, while, as is well known, when these useless people arrived sixty years ago, Cuba was a net food exporter and the world’s biggest sugar exporter.

But it couldn’t be any other way in a country where two thirds of its businesses and corporations are run by military people who know nothing about the economy, but who, on the other hand, have been decorated, with honours, for their swindles and embezzlement. What I say, General, is that if an independent journalist can be imprisoned in Cuba because, according to the political police, “He does not have a degree in that profession, is not authorised by the government, nor registered in any agency recognised by the Cuban government”, then the same logic should be applied to those people, and all the Cuban military should be relieved of all civil positions and responsibilities, and should stick to their armed forces activities, the only area of influence they should exercise, given their exclusively military training.

All in all, General, it doesn’t happen very often, but this time you are quite right: right now, the best technology in the country is in the hands of the absolute enemy of the Cuban people. These people, wanting to firm up their unscrupulous strategies, have got broadband, every imaginable satellite connection, the latest cellphones, and unlimited resources for supplying legions of subnormal trolls / agents trying to create currents of opinion favourable to the dictatorship which supports them.

These enemies are the ones who control the ETECSA monopoly (Cuban telecoms company), which is seated like a merciless giant on the doorstep of all the poor people, and which imposes sky-high tariffs for poor telephone service, slow, expensive and censored internet, which is only accessible in the tropical sun on those sidewalks where you can get wi-fi. It’s the same people who bug and listen in to every conversation and message sent from and within Cuba, the same people who wipe your email intray, hack embarrassing websites and censor controversial pages.

But, can I tell you something, General? The fact remains that, for the enemies of my people, your time is up. And you know we can see your fear. The wave of uncontrolled violence against the peaceful opposition in my country during the last year shows your desperation. You know that my people have long since stopped loving you – if that’s what you can call something cooked up by lies. Now, definitely, they just hate you and fear you. That’s why this riff raff launches wave upon unmerciful wave of repression, because they know that fear is the only and last weapon they have left.

Fortunately, fear is a feeling which is phony, fleeting, and fades with time. Now, an ever-increasing part of my people has stopped being afraid of their tormentors and has decided no longer to bow down before the tyrants. But this personal liberation emits a dangerously contagious aura and the enemy knows it. And, although you try to look imperturbable, nevertheless your nervousness betrays you.

I deduce that you yourself have enemies like that. If you happen to bump into them, please tell them, in the name of the Cuban people, that this is the time for them to get out of our way. It’s necessary, and for your own good, General, that you know it too.