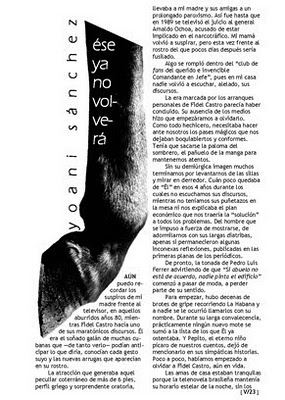 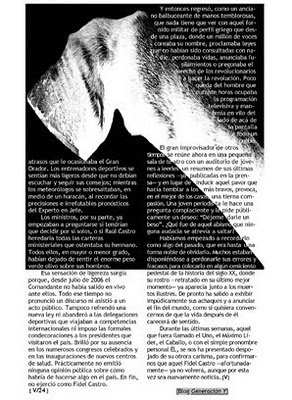 That one will not return

I CAN STILL remember my mother’s sighs in front of the television, during those boring eighties, while Fidel Castro gave one of his marathonian speeches. He was the dreamy stud of many Cuban women who—from seeing him so much—could anticipate what he would say, they knew each of his gestures, even the new wrinkles that appeared on his face.

The attraction which that peculiar countryman of more that six feet, Grecian profile, and surprising oratory generated, took my mother and her friends into a prolonged paroxysm. It was like that until, in 1989, Arnaldo Ochoa’s trial was televised. He was accused of being involved with drug trafficking. My mother sighed once again, but this time opposite the face of the one who would be executed in a few days.

Something was broken within the “fan-club of the beloved and invincible Commander-in-Chief,” because in my house, nobody again listened stupefied to his speeches.

The age marked by Fidel Castro’s personal tantrums seemed to end. His absence in the media made us begin to forget him. Like every sorcerer, he needed to perform his magical moves for us, leaving us widemouthed and contented. He had to take the rabbit out of the hat and the scarf out of the sleeve in order to keep our attention.

Without his demiurgic image many of us ended up leaving our chairs and looking around. How little remained of “Him” in those four years during which we did not hear his speeches, when we didn’t have his punches on the table and his explanations of how the economic plan would bring the “solution” to all problems. Of the man who imposed himself with the strength of his presence, of the lulling us with his long diatribes, some unconnected reflections barely remained, published on the front pages of newspapers.

Suddenly, Pedro Luis Ferrer’s tune, warning us that “If grandpa does not agree, nobody paints the building” began to go out of style, to lose part of its meaning.

For starters, there were dozens of flu outbreaks going around Havana, and nobody thought of calling them by his name. During his long convalescence, practically no new nickname was added to the list of the ones He already held. And Pepito, the eternal rascal of our jokes, stopped mentioning him in his funny stories. Little by little, we had begun to forget Fidel Castro, even while he was still alive.

Homemakers were calm because the Brazilian soap opera kept its stellar nighttime time slot, without the delays that the Great Orator caused. The sports coaches felt lighter since they didn’t have to listen and follow his advice; meanwhile the meteorologists got startled, in the middle of a hurricane, when remembering the precise and irrefutable forecasts of the Expert in Chief.

The ministers, on their part, began to wonder if they had to make decisions for themselves, of if Raul Castro would inherit all the cabinet positions that his brother held. All of them, to some large or small degree, had stopped feeling the huge olive-green weight on his shoulders.

That sensation of lightness came about because since July, 2006, the Commander had not shown himself alive in front of them. All that time he did not give a speech or attend a public event. Neither did he approve a new law nor champion the sports delegations that traveled to international competitions nor sponsor the formal decorations to the presidents that visited the country. He was conspicuous by his absence in the numerous congresses celebrated and in the inaugurations of the new health centers. He practically did not utter any political opinion over how things had to be done in the country. Ultimately, he did not act like Fidel Castro.

And then he returned, like a blabbering elder with shaky hands that had nothing to do with that once well-built military man of Grecian profile, who from a plaza, where a million voices chanted his name, proclaimed laws that hadn’t been consulted with anyone, pardoned death penalties, announced executions or proclaimed the right of revolutionaries to make revolution. Little is left of the man who for hours took over television programming and kept an entire nation on the edge of their seats.

The great improviser of other times assembles now in a little theatre with an audience of young people, to read the summary of his last reflections—already published in the press—and instead of inducing that old dread that made the bravest tremble, he provokes, at best, a tender compassion. A young journalist asks an indulgent question and publicly bids him for a wish: Would you let me give you a kiss? What of that abyss that no audacity dared jump?

We had begun to remember him like something of the past, it was even a noble way of forgetting him. Many were willing to forgive his mistakes and failures in order to place him in some cindered pedestal of 20th century history, where his face—photographed in his last best moment—already appeared next to the illustrious dead. Suddenly he has come out to lewdly exhibit his ailments and announce the end of the world, as if he wanted to convince us that life after him will lose all meaning.

During recent weeks, he who once was called the One, the Highest Leader, the Horse, or with the simple personal pronoun HIM, has presented himself to us stripped of his former charisma, to confirm that the other Fidel Castro—fortunately—will not return again, even if this time, he makes the news again.