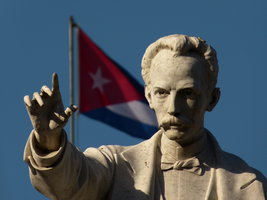 On the 160th anniversary of the birth of José Martí, it occurs to me to say something about two of his writings. The first, extremely well-known: the letter that the Apostle* wrote to his friend Manuel Mercado hours before his death in Dos Rios.

In this letter cataloged by some as his political testament, the Maestro* says:

I lived in the monster and I know its entrails and my sling is that of David.

This phrase has been repeated countless times by all media in Cuba since 1959, in schools and colleges and has been part of countless political texts.

The objective of dissemination of the phrase — as widely as possible — l seems clear to me. Therefore I want to dwell a little more on this other, which for some unpardonable omission, I have never heard or read in any appearance or any means of education or mass information.

About the independence of Cuba, the Apostle said in an article published in La América, in New York in October of 1883:

“… man is not guilty of being born with conditions of intelligence raised in a fair, heroic and respectable struggle, about other men, that the combined result of genius, natural talent, and perseverance, virtues more valuable to possess than that of genius, cannot respond as to a crime to he who has put to use the power of the mind and the will of nature; nor does one stop to see that whatever might be the systematic attempts at life, enjoyment and common benefits which come as proof of the remedy of evil will never be resigned to men to nullify the mind that populates the highest reaches of the cranium, nor to drown the autocratic and individual passions that boil in his chest, nor to confuse with the confused work of others, that which looks like a piece of his entrails and the wings ripped from his back, and his victory, his own idea.”

These words bring to mind the “brain drain” of the “traitors who leave for economic reasons and not for political reasons,” the Cubans who can not invest in their own country and that the standard of living of many people has always been viewed with suspicion by those who are obliged to know everything, insert themselves into everything and sink into poverty, absurdly, human nature.

At least from it says here, the most universal of Cubans do not seem very comfortable with the idea of making from all Cubans a tabula rasa.