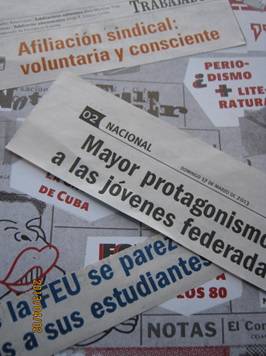 All professional associations in Cuba – those that claim to represent attorneys, architects, economists, artists, journalists and craftspeople, among others, as well as those made up of women, students, farm workers, laborers and others – which purport to the world to be NGOs, are in reality governmental organizations. They are organized, directed, financed and controlled by the state. Rather than defending the interests of their members, they really serve as straightjackets, forcing them to behave within established political and ideological boundaries. Anyone who dares to go beyond or to ignore them in the belief that he has some degree of independence is immediately called to account. If this does not achieve the desired result, the person can be dishonorably expelled from the association, which then makes him into a social pariah and, if he is a professional, leaves him without the right to legally practice his profession.

There is a group of people, a majority, who belong to these associations. As one might expect, they strictly comply with all the “commandments” in order to be able to work, study, travel, enjoy some advantages and receive official recognition. Another, less numerous group attempts to operate on the inside with some degree of independence by adopting contrary positions – the official one sometimes; more liberal ones less often – trying “to be on good terms with both God and the devil.” There is also a group of rebels who do not belong to either of these two. These individuals lack legal support and must act independently and at their own risk, without the possibility of access to the governmental platforms.

These organizations do not engage in controversial actions. They are really peaceful backwaters with the normal rivalries and hindrances characteristic of each sector. However, when someone – be it either an individual or a group – dares to act independently and with a certain degree of bravery by calling something into question, these organizations – headed by its most orthodox members – become courts of inquisition, drafting and publishing accords, communiques, declarations and letters with many “voluntary” signatures. The violator of the sacrosanct commandments is then incinerated in a bonfire of the most extreme intolerance. Examples of this practice abound and are quite well-known in every organization.

In these cases the outrage, which is political, ideological and directed from above, has nothing to do with the actual feelings of his or her colleagues. Unfortunately, these attitudes are widespread and the institutions as such are incapable of defending the interests of their members. Instead, they serve as prosecutors responding to “the boss’s orders.” The consequences are disqualifications, personal insults, acts of repudiation and other unpleasantries directed from on high at the allegedly guilty parties, chosen as the propitious victims of the moment based on the interests of the authorities, who are the ones really in control.