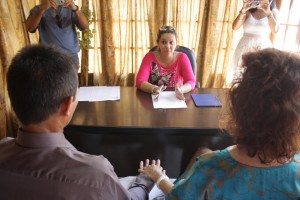 Like many Spanish who travel to Cuba, Angela A. F. knows that the inhabitants of this island are immersed in their problems, crammed with hardship and frivolities, on the edge of chaos and alienation. She also knows that friends overseas overestimate the events of this environment. She did not know, however, that by marrying a Cuban with whom she had two-year relationship, she would pass through an ordeal of appointments, waiting, stamps, paper and piles of currency, without taking into account the barriers of every kind to legitimizing their union before the Consulate of her country in Havana.

In the days before her fourth trip, before descending on the capital’s airport and embracing her beloved, she had to scamper between Castellon and the Consulate of Cuba in Valencia, where she paid 500 euros for four documents that she would show the International Notary Specialist based in Miramar, in Havana, who would certify their the union before two witnesses and a photographer, after charging 625 convertible pesos (about $625 U.S.) and checking the bundle of papers of her Cubiche boyfriend, a gentle skeptic of fifty who walked with her under the tropical sun between taxis and offices. Then they breathed happy for three days in Varadero.

But the happiness did not last long, because before coming to the Consulate of Spain in Havana she requested the Travel Certificate from the International Consultant in Miramar, where she was charged 150 pesos convertibles and warned that delivery of the document takes one to two months. To make matters worse, at the official Spanish consular appointment she did not receive the rest of the documentation for her spouse who must manage an affidavit and register three certificates in the International Notary Foreign Office, located at 21 and 24, Vedado.

With so much outstanding paperwork and the marital interview postponed, Angela decided to return to the Mediterranean until further notice. While waiting for the stamps from Foreign Relations and the Migration Certificate, the Cuban-Spanish couple communicated by mobile phone and emails. Where appropriate, new technology acts as a matchmaker of the reunion.

The odyssey continues with the request for another consular appointment, the postponed delivery of the documents and her return to Havana for the interview, in which she must answer surreal questions that demonstrate the legitimacy of marriage, because Cubans invent ways of escape, and consular officers are specialists in migratory trickery. For this meeting, both show the letters exchanged, photographs of family and bills to pay for Internet messages and calls from Spain to the island.

If the consulate considers the marriage legitimate and enters it into their the wall of papers and procedures doesn’t end. He will have to put himself out to receive the “Family Book”, apply for the Visa” for reuniting, and then deal with the uniformed officials of Immigration and Nationality, who will demand the Marriage Certificate, Passport, the Permit for leaving, known as the White Card or Freedom Charter; all in hard currency, like the Residence Permit Abroad, whether temporary or permanent, and other legal details that multiply the uncertainties and frustrations.

Although the future is uncertain and distance painful, Angela is tenacious, tough and trusts in love. Her Cuba spouse has survived more severe tests. For now, both are part of that legion of couples who are separated by state bureaucracy.