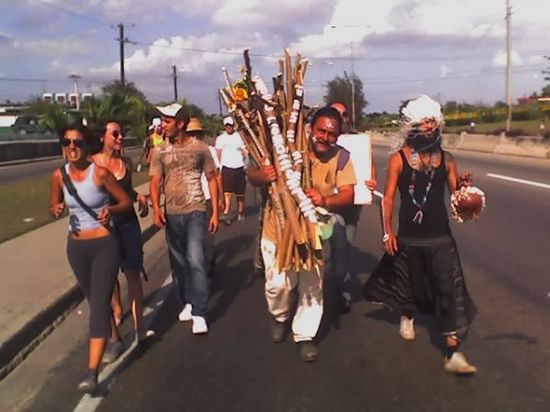 A man crawls on his knees in the street, carrying on his shoulders timbers made into a cross. He is traveling on the avenue that leads to the airport. The cars stop and let the penitent take his time. It’s December 17, the day dedicated to Saint Lazarus, syncretized into African beliefs with the orisha Babalú Ayé. This is the most popular Catholic saint among Cubans, especially those with a physical illness who ask him for a quick recovery. Then comes time to repay the promise, which entails taking an offering to the Shrine of El Rincón.

Every December a sea of people walk, crawl, or carry heavy stones to the small church on the outskirts of Havana. Alongside the street, stalls offer for sale images of saints, candles and rosaries. The people of El Rincón make a killing with everything the pilgrims are going to need: water, food, sanitary services. At midnight on December 16 the area around the temple is already full of people. Prayers and whispers are heard.

The images in the Church of St. Lazarus are impressive and not only for the faith one sees in the people. What is striking is that in a nation where for decades the government has established atheism, so many people remain devoted to the saints and deities. Right now, at St. Lazarus people are asking not only for help with sickness, the pleas have been extended to matters of love, obtaining housing, or taking a trip abroad. This December, one man carried on his head a wooden carving of an airplane. Perhaps to receive a visa or an exit permit.