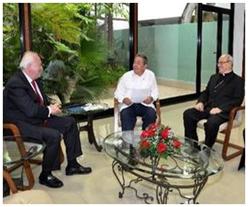 The release of 52 political prisoners, who had been sentenced in 2003 to between 6 and 28 years, caused joy on the one hand, and skepticism on the other. The Archbishop of Havana issued a communique, and Miguel Angel Moratinos, Foreign Minister of Spain, gave statements to the press. What is missing is the official government announcement on the matter. Clearly the scenario remains shadowy.

According to Moratinos, there is no reason to continue Europe’s “common position” after the releases. He said he felt satisfaction from “the possibility of definitively settling the question of the prisoners,” when in fact this resolves only a circumstantial situation. The issue of human rights on the island is not summed up by the release of political prisoners. Not at all.

This demonstrates some naivety by the Foreign Minister of Spain. Or perhaps he is only concerned with resolving the most immediate problem, which benefits only the government of the island. So far the existing leadership has made no public commitment and has given no assurance of compliance.

It is no secret that the Spanish minister requested an extension until September for his European Union counterparts to decide whether to reaffirm or repeal the Common Position, which since 1996 has conditioned its relationship with Cuba to progress in human rights.

Does the future of Cubans not matter? What will happen afterward if the “Common Position” is modified because of this gesture by the Cuban government? This should not be blurred by the release process. I recognize it is a positive step, but it in no way represents an improvement in matters of human rights. Not while laws that criminalize the exercise of freedom of expression and opinion are in force.

Moreover, it is suspicious that a state, constitutionally declared to be secular, issues it orders through the Catholic Church. Even more that a representative of a foreign state becomes spokesman for the government on the island, whose foreign policy is uncompromising on the principle of state sovereignty and non-interference in internal affairs.