14ymedio, Mario Penton, Miami, 6 July 2018 — Five evangelical denominations in Cuba issued a public statement against equal marriage. The document states that “gender ideology” has nothing to do with Cuban culture “or with the historical leaders of the Revolution.”

The Evangelical League of Cuba, the Baptist Conventions of the West and East, as well as the Methodist Church and the Evangelical Assembly of God endorsed the document as the National Assembly prepares, at the end of the month, to debate a constitutional reform that seeks to update the constitution approved in 1976.

“We want to sensitize the authorities to the danger that equal marriage can bring to the nation,” said Dariel Llanes Quintana, president of the Western Baptist Convention.

According to Llanes, the five denominations, which are not within the Cuban Council of Churches, requested permission from the Government to carry out a march along Havana’s La Rampa, from 23rd and L to the Malecón, but this request was rejected by the authorities.

“We met with those responsible for religious affairs in the leadership of the Communist Party, Sonia García and Caridad Diego, who explained that the demonstration could not be held, but that the constitutional reforms would be carried out after a “broad popular debate,” Llanes added.

Llanes explained that the churches intend to take advantage of the temples and houses of prayer to explain their position to the population. In the joint statement, the evangelical denominations state that the family “is a divine institution, created by God” and that marriage “is exclusively the union of a man and a woman.”

The religious leaders point out that the gender ideology “has no relationship with the communist countries,” and gives as examples the extinct Soviet Union as well as China, Vietnam and North Korea.

“That paragraph was included as proof that communist countries do not have same-sex marriage,” said Bishop Ricardo Pereira Díaz, representative of the Methodist Church. “You can’t take from capitalism what suits you. If the country is communist, let it be communist,” he added.

To the religious leader, the ideology promoted by governmental institutions such as the Center for Sexual Education (Cenesex), directed by Mariela Castro, daughter of former President Raúl Castro, constitutes a danger for children.

“In other countries, parents can send their children to a private or public school that is in accordance with the precepts of their faith. In a country like ours where education is governed by the State and there are no alternatives, putting a child in a place where they must learn something that is contrary to their faith is to violate their free will, “explained the pastor.

Pereira believes that more than 60% of the country is against homosexual marriage and gender ideology, although he does not have data to support that figure.

The constitutional reform is part of the unfinished transformations left by former President Raúl Castro after a decade in office. Castro currently presides over the Communist Party and the commission charged with proposing the changes to the Magna Carta.

Some experts consulted by this newspaper believe that the reformed Constitution will modify the family code and will incorporate the same gender parenthood. Other foreseeable changes are to allow the presence of the small and medium-sized private company and to specify the limitation of the terms of public office to five years, with a limit of two terms.

The Evangelical Churches in Cuba have experienced a rapid growth after the religious opening that the country experienced in the 90s. The Methodist Church has more than 80,000 faithful, while other denominations also have hundreds of “temple houses” scattered throughout the country.

LGBT activist and Pentecostal member, Victor Manuel Dueñas, exiled in Holland, regrets that the declaration of the evangelical churches ignores the persecution against Christians. “In the Soviet Union, North Korea and Cuba itself, being a Christian was considered a crime, and together with homosexuals, Christians were held in concentration camps, and these pastors should study a bit of history,” he said.

Adiel González Maimó, religious leader of the Christian Metropolitan Church, open to the LGBT community, believes that Christian denominations “will do everything they can to avoid homosexual marriage.”

The young man from Matanzas, close to the Cenesex, called it “a manipulation” for the statement of religious institutions to use “political elements” to reinforce their reading of the Bible. “I am sure that the government is going to offer a strong response, they are accusing the authorities of being homophobic, just after everything that has been done by the LGBT community,” he added.

“The Word of God says very clearly that Jesus came to give us life in abundance, when you take away the right of people to live their love, you are robbing them of the life and happiness that God wants for them,” he said. 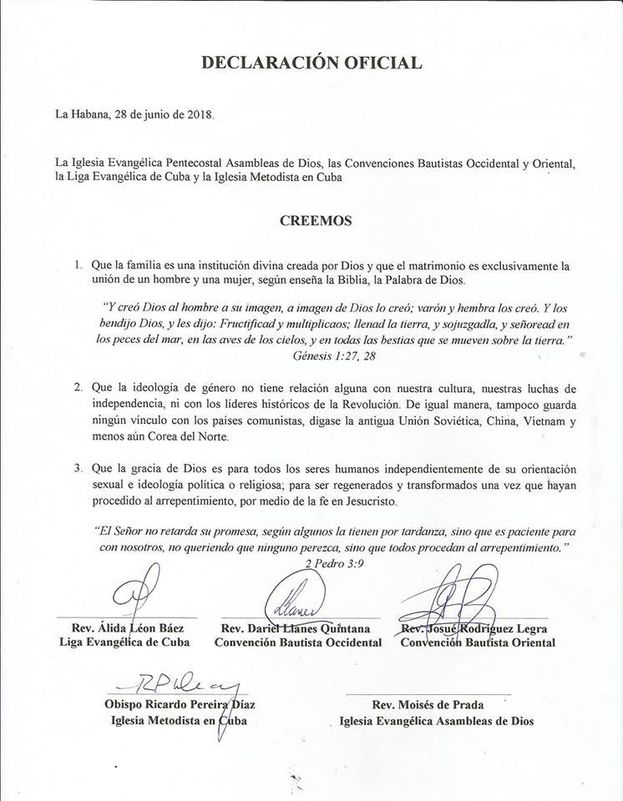