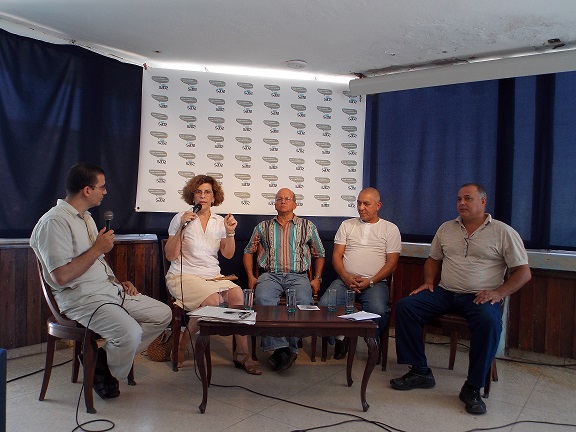 Translator’s note: At the end of this post is a video (without subtitles) of the State Security operation around Estado de Sats during the event Regina appeared in (shown in the above photo). It is this type of operation that she is referring to in the opening lines of her post.

It seems the Estado de Sats setbacks will become an ordinary thing: discouraging apocryphal messages, intimidating operations, unnecessary detentions. They are trying to prevent Estado de Sats from achieving a quorum, by my impression is that it has come to stay, satisfying a need not met by any institutional space, however open it pretends to be.

Invited to speak about self employment, I shared the panel presented by Antonio Rodiles with the journalist Orlando Freire and with Antonio Ocampo and Francisco Valido, engaged in private dining and transport respectively.

I believed that my foray as an “expert” on the topic would make me nervous, but not at all. A relaxed air connected with those present for more than two hours. Questions, opinions, laughter, and in the end, more questions and many compliments.

I had the pleasure of meeting in person a Cuban who lives in Spain whom I already knew virtually. All would have been very fine except for several people being prevented from coming.

At home, after breakfast, I undertook (or took on) the kitchen. A thorough cleaning, of the kind not done every day, in order to put the ego in its place, to remind myself that it’s not about speaking well on a panel, that I continue to be one more citizen.