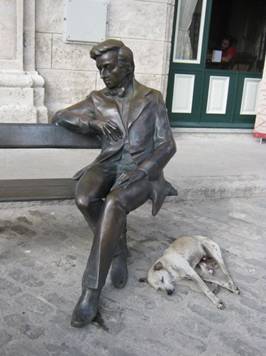 In Cuba, although before there was, currently their appears to be no effective organization to protect animals, although there is talk of one, Aniplant (Society for the Protection of Animals and Plants), which doesn’t appear in any telephone directly, and whose activity is so non-existent it lacks a presence and activism.

The outrages committed daily, mainly against dogs and cats, caused anger and pain to sensitive citizens in the face of their helplessness to avoid them. The so-called stray dogs and cats that roam our towns and cities trying to survive — many of them abandoned to their fate by their original owners, who use them as pets when they are young and then when they grow up and require responsibility dispose of them like a useless old shoe — are the objects of absurd beatings, tortures and even acts of vandalism that kill them, as denounced on Tuesday the 15th in the Rebel Youth newspaper under the title “Diary of death and kindness,” without the authorities of public order, or any other, taking action on the matter, nor those responsible being prosecuted.

This reality, palpable at any time in the streets of our neighborhoods, shows the  citizen ignorance that exists, regardless of the vaunted but very questionable education we are said to possess, which seems to leave much to be desired and be more bark than bite, considering the serious problems in education for years now.

Oddly enough, it is precisely the youngest (teens and even children) who are involved in these inhumane acts, with the complicity or indolent gaze of adults, which, rather than stop them and get their attention, often to find it funny or participate in it.

Among the many evils present, dozens of them denounced recently by the highest political authority, the lack of animal protection, with institutions and laws that safeguard the street stray, is one more, which must not be allowed not to escape our attention, if we live in a civilized society.