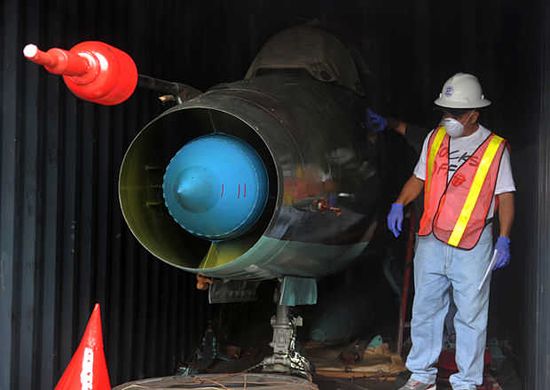 The unforeseen, situations that nobody predicted, are for politics like pepper on food. When it appears that all the possible variables of a scenario are on the table, an event sneaks in among them that changes everything. Such is the case with the diplomatic crisis generated by the arms transported from Cuba in a North Korean ship, discovered in the Panama Canal.

After years of trying to clean up its act before international bodies, this incident sets Raul Castro’s government back decades, returning it to the era of the Cold War. There is no time left for the octogenarian politician to reverse the effect of such a a misguided operation. Between now and his announced retirement in 2018, there are not enough days to make people forget the bungling of those missiles hidden under a cargo of sugar. Someone else, in his position, would renounce or remove the Minister of the Armed Forces, but a play like that has no precedent in the Castro regime.

On hearing about the trafficking in this arsenal of war, the question that immediately jumps to mind is how many times have operations like this been carried out without being discovered. The testimony and speculations about Cuba’s sending troops and arms to countries in conflict abound.   It is symptomatic that on this occasion the contraband has been intercepted mid-journey, which raises a new question. Why in this case has it come to light? Clumsiness or intention? Bungling or being out of touch with the workings of the real world? The questions will be asked, but the answers are known only to a few.

The truth is that these events confirm the denunciations of those who, for years, have documented the support of the Plaza of the Revolution for guerrillas, insurgents, destabilization groups, and governments sanctioned by international organizations. Wrapped in the halo of “proletarian internationalism,” the help offered in most cases was hidden with subterfuges, such as merchant ships transporting soldiers or military equipment on the sly. It was the era when the sharp eyes of the satellites didn’t track the planet with such precision, and the Soviet bear was there to pull the chestnuts out of the fire for its outstanding disciple in the Caribbean. A bygone and remote era.

If Cuban political leaders believed they could still hide planes and missiles on a ship, send it through the Panama Canal and successfully arrive at a North Korean port, it is proof of their great disconnect from the reality of the world they live in. The statement issued by the Ministry of Foreign Affairs is also a part of this anachronism, attempting to explain the cargo as a shipment of “obsolete” military equipment off to be repaired in the country of the Kim dynasty.

The justifications or falsehoods that were once effective, fall on the ears of the citizens of this third millennium like bedtime stories for unsuspecting children. Their naiveté was left behind in the 20th Century and it’s a good thing, because the leaders can’t fool us as easily as before. In fact, the performance of the Cuban authorities has displayed such stupidity that it suggests it was an operation prepared by the Castro regime itself, in order to be caught red-handed.

Every time that relations between Havana and Washington seem headed for a rapprochement, some event generates an abyss between the two governments. The most famous example was the shooting down of the Brothers to the Rescue planes in February 1996.

Could it be, on this occasion, that the orthodox within the power structure are dynamiting what they perceive to be Raul Castro’s weakness in trying to talk to the neighbor from the north? Or is it the General-President himself who has built this scandal to try to avoid getting to the negotiating table? The “conspiranoia” is infinite.

However, there could be a simpler answer behind all this, as incredible as it seems: the Cuban leadership really believed that it could still continue playing with toy soldiers and ignoring the provisions of the United Nations, without being discovered. Holding power for too long makes those who exercise it into a species of autistics, disconnected from reality. So this could be one of the most chronic cases of political autism we now have in our global village.

In the midst of the complex situation in Cuba, why would the government dare to undertake such a ridiculous operation? After so many efforts to appear before the international community as a country transitioning through a process of openings, where does this “sugar missile” piece fit? Well, it doesn’t fit!

Evidently the relations between old ideological allies are still placed above pragmatic diplomatic strategies.  Old comrades are still prioritized, although to the eyes of the world they are seen as a family dynasty, a recalcitrant violator of the human rights of their citizens, constantly threatening the rest of the planet with nuclear conflict. The fellow travelers support each other, so they have to violate the same UN resolutions to achieve it.

Now that the boxes of missiles are discovered — the MIG-21 airplanes and the rocket batteries — it remains to be known how Raul Castro will get out of such a delicate situation. An apology would not be enough, because the government would still have to comply with some diplomatic sanction resulting from its actions. Acting the fool and reaffirming their “sovereign right” to send arms to be “repaired” in North Korea, will further isolate the island’s authorities at a time when economic support from abroad is urgently needed.

The insolence will also conspire against a possible loosening of the European Common Position, and against the easing of the American embargo. To reply with a barrage of government attacks against the president of Panama won’t accomplish much, because this problem involves other nations who don’t appear willing to forget so easily.

So, then, how does the Castro regime turn the page, minimize what happened, and present the world with a real posture of mea culpa and peaceful engagement? The only solution that remains is to announce political change, the opening so often demanded by its citizens and by international  agencies and governments.

The only thing they can do to overcome this huge mistake is to focus all attention on the total decriminalization of dissent in Cuba, the legalization of other political forces and the final dismantling of totalitarianism.

From “Cuba Libre” in El Pais.