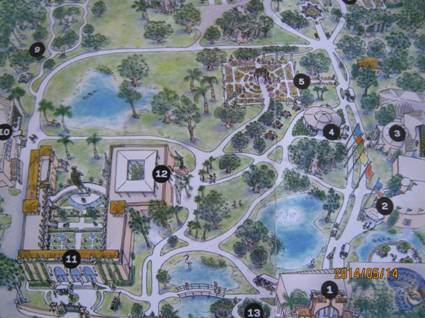 Map of the Ringling Complex.

I still remember with much fondness the circuses of my childhood, but above all the marvelous and spectacular Ringling Brothers, that would arrive in our country in December — in the early days encamping in the old Sports Palace on Paseo and Primera streets, facing the sea — and later, towards the end of the 1950s, in the then-resplendent Sports City.

Carmen, punctual as is her wont, came to get me at 5am so that we could go together to the meeting place from which the bus would depart that would take us from Miami to Sarasota. We were the first to arrive, even before the bus, because we are both like that, super-careful in meeting our commitments. Little by little the other tourists began arriving until the full group was assembled.

The tour guide was a “cubanaza*”- very amusing and active, with a great love of the arts – who specializes in putting together these types of excursions, all with a cultural purpose. And so, between storytelling, laughs and songs – including interesting raffles of books and small paintings created by some of the tour participants, among whom were writers, a poet and even a painter – we made this long trip which turned out to be most pleasant.

Arriving in Sarasota, the tour personnel provided us with ID wristbands and maps of this lovely place, so that each person could choose their companions and where to begin their journey through this grand cultural complex, a major attraction and pride of this city, which has been converted from the mansion, art gallery, theater and other property that belonged to the family of John and Mable Ringling, which they bequeathed as a heritage legacy, and which since 2000 has been under the guardianship of Florida State University.

Everything, absolutely everything, impressed me because of its grandeur and splendor, but what most amazed me, owing to its magnitude and level of detail, was the impressive scale model of the great circus industry that gave life to this family empire, whose spectacles I enjoyed every winter in my beloved Havana, up until 1959.

The family mansion, called “Cad ´Zan” by its owners — which in the Venetian dialect means “John’s house” — was built by the architect Dwight James Baum in 1924, in the Venetian baroque style, impressive for its luxury and excellent state of preservation.

Another great attraction is the Museum of Art which displays collections of the most famous European painters: El Greco, Rubens, Velázquez, Veronese, Gainsborough, and other great masters. The building is surrounded by splendid gardens, where the sculptures look to be enjoying the marvelous surroundings. We also visited the Asolo Theater, built in 1798, dismantled and transported from Italy to be added to the Ringling complex in 1948, becoming the only 18th century theater in the United States of America.

We returned well into the evening, satisfied and exhausted from so much walking and enjoyment of this well-organized and enjoyable excursion to one of the most interesting corners of this beautiful State of Florida.

*Translator’s note: “Cubanaza(o)” can be said to be a sort of “super Cuban” – someone who is almost a caricature of the Cuban style of speech, mannerisms, attitudes, etc. The term as used by a fellow Cuban to refer to another is often – as in this case – one of endearment.