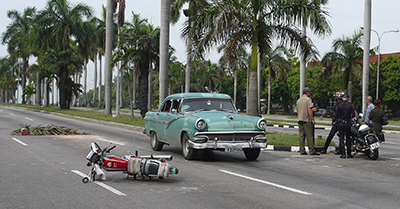 There are many who try to imprint their pronouncements with the hallmark of official discourse. To blend in and achieve uniformity with that language, they select certain words, certain phrases and investigate ways to say typical newspaper articles, academic dissertations or legal allegations.

One of the most recent linguistic elements of this nature consists of a curious pairing in which one part is the concept of “risk perception,” and the other part is “vulnerability.” Meteorologists, epidemiologists, traffic safety specialists, economists, don’t hesitate to say that to the point that the perception of risk is higher, one can reduce the vulnerability of the presumed victims of a danger.

I confess my ignorance of the origin of this equation, which not only seems logical to me but even lucid. I suspect that it has been imported from an international academic environment — perhaps from military strategy or scientific language — when some clever member of a Cuban delegation was caught out there sowing it in the fertile ground of lack of originality in the official phraseology. The funny thing is that the verbal combination is not indebted to either Marxist dialectic or the harangues of the barricade. It’s implacably cold, but catchy.

Try it yourself and confirm it. Say, for example, that the lack of information in our press about criminal acts noticeably reduces the perception of risk that a person in the street should have and, as a consequence, increases the vulnerability of a citizen to criminal attacks. The triumphalist tone of the ministerial reports to the Cuban parliament don’t allow an adequate perception of the risks that threaten our society, which leads to greater vulnerability, be it with regards to the economy, education, healthcare, tourism, or anything else.

If we think of all the vulnerabilities that open before us, like cracks on the edge of the abyss, when the lack of perception of risk posed by transparency, secrecy, the verticality of command, the lack of citizen participation in decisions, the absence of political debate, the penalization of dissent, in short, it’s scary.Perceiving the risks, decreases our vulnerability.