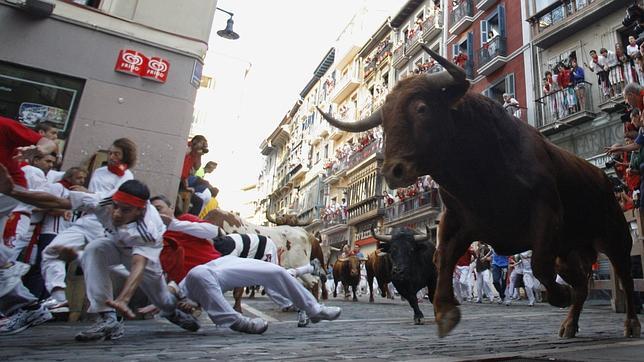 Not the disdain of the English-speaking animal rights activists nor the anti-bullfight stance of dozens of people and communication media stop the explosion of jubilation, fear and tension of the million people who run before the bulls in the streets of Pamplona, from Saturday, July 6th to Sunday the 14th.

Once again the city of Pamplona, ancient capital of Kingdom of Navarra, fills with pilgrims from half the world who dress in red and white, sing the original hymns of protection to San Fermin, with his image they make a hour-and-a-half long procession, after which they head toward the streets of the running of the bulls, where men and beasts enclosed in “the fences,” nurses and police “transit” to the Plaza de Toros.

The running of the bulls start at 8:00 in the morning, and passes from the corrals of Santo Domingo to the Plaza de Toros de Pamplona, a distance of 850 meters that demands training and puts courage, nerves, and abilities to the test to avoid goring or fatal falls in the middle of so much euphoria and collective passion. It seems that a few minutes of enclosure link men and beasts. They meet again in the plaza hours later, the bulls in front of the bull fighter, the humans from the stands.

These Sanfermines attracts figures such as Joselito Adame, Alejandro Talavante, Morante, el Juli, Perera, Fandino, and others famous in the ring contracted by the Bullfight Commission of the House of Mercy. The bulls are put up by the livestock businesses Cebada Gago, Dolores Aguirre and Fuente Imbro. The Navarrian government receives more than one million euros in taxes.

Bull fighting is not a sport but a spectacle with deep roots in Spain and counties in the Americas such as Mexico, Colombia and Peru. Behind the spectacle are the ranchers, the professionals of challenge, the fans, the bull fighting plazas and the hundreds of local governments that promote the running in the streets during the summer, from the great Madrid to the small Vall de Uixo, in Hispanic Levante.

Perhaps the Sanfermines, this festival of passion and challenge, is the greatest traditional spectacle in Spain; followed by the celebrated and multitudinous Fallas de Valencia, the Festival of Pilar in Zaragoza, Holy Week and the Fair in April in Sevilla — which exalt the Andalusian culture — the Carnivals of Tenerife and Cadiz, the first sumptuous, the second satirical and mocking; the monumental Hoguera de San Juan in Alicante, the Celebration of Moors and Christians, especially that of Alcoy; the Viking Festival in Catoira (Galicia), San Isidro in Madrid and the less festive and atypical Day of San Jordi in Cataluna, where the running of the bulls was prohibited. 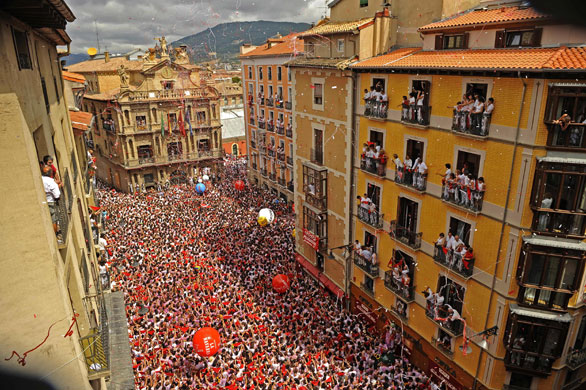