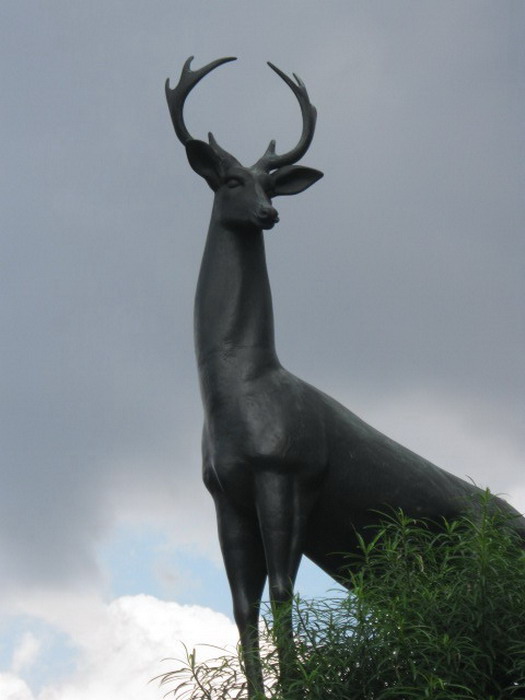 Some years ago, disenchanted with the neglect of the place and the precarious state of health of the animals, I stopped visiting this formerly wonderful zoo. Opened in 1939 and later expanded, it ranked among the best in Latin America in the 1950s. It provided a pleasant source of recreation and culture for children, teenagers and adults, as well as easy access, located, as it is, in the heart of the city.

A wonderful group of sculptures, created by the artist Rita Longa and located at the park’s entrance, proclaim a priori the beauty that awaits visitors within. The numerous entrances(closed now for many years)from the streets surrounding the park are shuttered by iron gates, which have been eaten away by rust and neglect, but which are miraculously still standing. These once made entry and exit to the site easier on days when attendance was high, such as Saturdays and Sundays.

When speaking to its then director, my friend, more than two decades ago, she told me how upset she was to realize that she lacked the necessary funds or an adequate number of staff to support the animals and maintain the facility. She observed with astonishment, unable do anything about it, how breeding eggs would disappear daily, and how animals would suffer an unbelievable number of accidents, requiring them to be put down. She told me with obvious sorrow that these unfortunate animals were mistreated by the workers themselves in the hope that, once out of circulation, they could be relegated to the “soup kettle.” After several meetings with employees she had to therefore come to an almost conspiratorial agreement with them. They would collect all the birds’ eggs and turn them over to her, whereupon she would decide which ones could be used for a park worker’s breakfast, and which would be set aside for reproductive purposes. As a veterinarian she had to very carefully evaluate the health of each “accidentally injured” specimen in order to determine if and when there was no option other than sacrifice. The most striking case was that of the flamingos, who frequently turned up with broken feet.

The park, then as now, is under the inadequate supervision of Áreas Verdes (Green Spaces), an organization that does not even have the resources to maintain these parts of the city, much less a zoo. Today it has become a separate entity within the National Assembly of People’s Power, which regrettably has no power, and is not as people oriented as its name implies. Unfortunately, this organization also lacks adequate funds for the maintenance and preservation of the facility.

While reading an article on this subject published in the international press today explicitly criticizing the sad state in which the park finds itself, I remembered that sad day when my friend, Maria, took her granddaughter on a stroll through the park, and left it traumatized after seeing baby chicks being thrown to the monkeys for food. (This was at the time when incubated chicks were distributed through ration books. You were supposed to raise them, fattening them up, in order to later slaughter and eat them.) She grabbed one which had escaped the clutches of a startled simian, and took it home where she ended up raising it as a pet for her granddaughter. It at least had the good fortune to live to an old age and die of natural causes.

Though I live in close proximity to the park, it has been years since I have heard the roar of the lions in the afternoon. Nor can chipmunks be seen roaming through the neighborhood gardens. I have a friend and neighbor, Humberto, who adopted an emaciated and sad looking chipmunk who appeared one day in the tree of his patio. He began feeding it, trying little by little to gain its confidence, until it began to approach him, motivated by a loss of fear and a need to eat. Now it is almost always pinned to his chest, like a decoration. Together they stroll the neighborhood to the astonishment and curiosity of all who cross their path.

Mustering all my courage, I decided to go back to the park. The entry fee was only one measly peso (a ridiculous situation today). The entire main entrance, through which the public normally flows, was cordoned off by makeshift bars. The only access was along an adjoining sidewalk.

I was shocked to see how widespread deterioration and neglect are throughout the facility. The cages of the few remaining animals are rusted and very deteriorated. (Quite possibly they are the same ones from fifty years ago.) The famous island of monkeys is deserted, and the waters surrounding it are fetid. In one cage I could see only a pair of resting lions, indifferent to the few people trying to rouse them with screams and gestures. It is worth noting that people visit the facility not out of love for the animals but for the cookies, candies and sweets sold in the cafe, and priced in the inaptly named Cuban peso.

During my tour I spoke with two young veterinarians, who provide services on site, and they commented to me how much they suffered, seeing the public itself mistreating the animals they come to visit. They saw with sadness how a pelican had apparently been killed by thrown stones. They say that this happens often under the indifferent eyes of the adults accompanying children. Added, in response to another question, they said that the peacocks, which used to walk around loose among the visitors, have had to be locked up because they are stolen or killed.

When I asked them why most of the cages didn’t have signs with the names of the animals, they told me something similar: “They tear them off and take them or they throw them.”

This is the sad situation at the Zoo in Havana. I would like this story to serve to call the attention of both the authorities and the citizens, to save this important recreation, educational and cultural facility, that in earlier times filled us with pride.

The defense of the environment, of its flora and fauna, must begin at home!