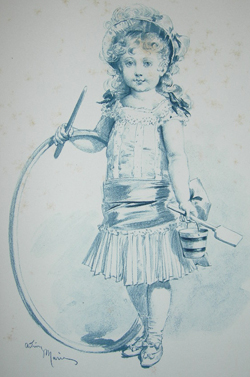 It is rare to find a Cuban who doesn’t know some poem by José Martí, at least some snippet of those simple verses we learn by heart in elementary school. From the time we’re little, in the morning assemblies at school, in Spanish classes, at all the political rallies we attend, we hear over and over the lyrical verses of our national hero. The over exposure to him leads to the point where many associate him with the current state of things, and in the very poor areas, where the electricity often fails and food is in short supply, they have even vandalized his busts.

But back to the Apostle’s poetry, especially the most famous of them, with its childlike tone, full of ribbons, flowers and images, which has the title “Rose’s little shoes.” Any child under ten could rattle off its sweetened octosyllables and narrate the story told in its verses. But could also recite some of the many parodies that have been written, especially those of a political nature that make a mockery of the system. Marti is the most parodied of our authors, which is not a mark against him, but rather proof of the familiarity people feel with his work.

Among the many jokes we draw from the work of this universal Havanan, is one taken from “Rose’s little shoes,” where the protagonist — named Pilar — meets a poor little sick girl at the seashore. Without consulting her mother, the rich girl takes off her shoes and gives them to the little needy one. She completes her generous gesture with a phrase, “Here, take mine, I have more at home.”

That brief line, written almost 150 years ago, is now an infinite source of jokes, wisecracks and imitations. It is used to indicate the social differences that are becoming more obvious and traumatic in a society where the official discourse continues to talk about equality. The most profound of the jokes among the students, obliged to wear school uniforms, has do to with their ability to rate the buying power of each person by looking at their feet. Although one of the slogans most repeated by the Cuban government is that there are no children walking barefoot through the streets of this Island, the big question is where do parents get the money so that their children aren’t walking with their heels on the asphalt. It’s enough to walk past store windows and look at the high prices of leather, to realize that a salary alone — the fruit from working for the State — won’t be enough.

The drama of shoes for children becomes more poignant when school is about to start and the markets are crowded. It is not unusual then to hear the parody of Jose Marti’s poem everywhere, especially when the first day of class hundreds of eyes will look over what is shown below the pants and skirts. The cost of a pair of shoes, the cheapest, is equivalent to the average monthly wage of any worker.

We must choose between surviving for thirty days or providing our children a pair of sneakers, sandals or boots. Luckily people are not satisfied and almost everyone does something illegal to send their children to school smug and comfortable. There are also generous family or friends who donate clothing and shoes, already used, to others who need them most. Those who have no clandestine business, “divert resources from the state” or appeal to the family that lives across the Straits of Florida. Ironically, it is the exiles who end up making the official propaganda come true. The high-sounding phrases of the political billboards are based on the thousands of dollars each year that enter the country through remittances.

But the parody of Marti’s poem does not attack those who have better shoes thanks to inventiveness or a relative, but others, those who have gotten them through privilege. “Take them, take mine, I have more at home,” comes the sarcastic whisper of the son of a colonel or of a trusted diplomat posted abroad. And so the caricature of Pilar and her generosity is evoked again and again when someone brags about owning something that ordinary Cubans can barely dream of.

For example, the teenage grandson of some general, driving his own car, will hear the cute verse tossed at him when he boasts of his four wheels and their gleaming tires. It is also a way of saying: we are watching, we know that everything you are flaunting came to you by way of ideological loyalty. Sometimes it’s enough to say, “Yes, I know, you have more at home,” for the braggart to feel unmasked and the conceited to comprehend the ephemeral nature of the crumbs that come from power. Because history has these ironies, this way of making fun of everything and everyone. The nineteenth century lyricism — by the grace of necessity and humor — converts verbal material into scorn, sweet revenge on those who have less. And at some point far away, Marti’s taciturn face, believing that his Pilar with her straw hat and ribbons will be remembered as an example of kindness, not used as a spear against the false discourse of egalitarianism.