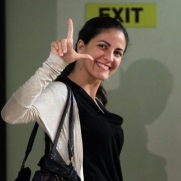 The Cuban authorities have allowed Rosa Maria Paya, the daughter of the deceased opponent Oswaldo Paya, to leave the Island. This last Thursday she took a plane headed to Spain and from there will travel to Geneva (Switzerland), where she will participate in a Congress on Human Rights, according to EFE.

In December the Cuban government had refused Rosa Maria Paya an “exit permit” to attend an event in Chile.

The daughter of the leader of the Christian Liberation Movement (MCL) was able to travel after the travel and migration reforms went into effect January 14.

At the Havana airport, and after completing the billing procedures, Rosa Maria Paya passed without the immigration controls without problems, according to EFE,to take an Iberian Airlines plane to Madrid.

The young woman explained that from the Spanish capital she would travel to Geneva, Switzerland, to participated in a human rights forum organized by a coalition of NGOs.

On February 20 she will return to Madrid, where she will spend a few days and hopes to see Angel Carromaro, the young leader of the People’s Party New Generations, who was sentenced to four years in prison for the car crash that killed Oswaldo Paya and the activist Harold Cepero on July 22 near Bayamo.

Carromero, who was the driver of the vehicle in which the two Cubans were traveling (with two others), was transferred to Spain at the end of December to finish the rest of his sentence.

Oswaldo Paya’s family has always maintained that the young Spaniard is innocent and has insistently demanded an independent investigation of the event.

Rosa Maria Paya, who expects to return to Cuba in less than a month, arrived at the Havana airport accompanied by her mother, Ofelia Acevedo, family and friends who said goodbye to her by making an L for Liberty with their fingers, a symbol used by MCL, as she passed through the immigration controls.