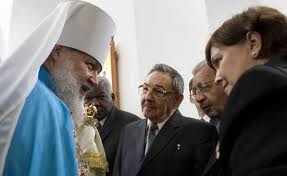 According to figures from National Institute of Housing, there are approximately 3,700,000 homes in Cuba, 85% of which are privately owned. We all recall that the new housing law was one of the much anticipated measures enacted by “the National Assembly and the president-general to update the country’s economic model.”

Since then there have been an endless number of property listings appearing daily in Cuban cyberspace. Some experts have already described the dizzying rise of the housing market as a new boom, one in which property exchanges, sales, donations and asset allocations by native-born Cubans residing in the country or permanent resident foreigners living on the island predominate.

All this buzz began giving me some doubt. Fed-up with the fact that we Cubans always serve as the backdrop in a prolonged family venture that encourages lying, I became interested in finding out who was buying houses in Cuba.

Getting information is not difficult if you rummage around in the squalid areas of a country where there are swarms of informers who want to feel they are being well paid. After a few weeks of finding out a little here and digging up a little there, they began to uncover the names of artists, family members of public officials, carefree ladies, shameless widows, government bureaucrats, emigres, exiles, workers in the tourism sector, farmers, former military men and budding entrepreneurs—none of whom would be worth mentioning.

And so it went. After much listening and discounting, the image of one man began to recur—someone of hazy identity—singled out as the major buyer of expensive lots, apartments and houses.

Tall, blond, chubby, a man of surly manners—the person most sought after by home sellers is someone named Alexander. I refer to him as “the brick guru.” I do not know his last name, but many people assure me he is the son of a Russian veteran of the war in Chechnya. He lives in Spain, very close to Barcelona, in an exclusive residential complex dubbed “the Russian mountain.”

A lady’s man in Havana thirsty for love, westernized but not stridently so, he arouses suspicion in some, fascination in others. I do not believe this gentleman is a boss in the Russian mafia, but all indications are that—with the consent of an unethical government and a very esthetic state—this singular figure is a magnet for attracting high-end investors with shady backgrounds.

I read somewhere that history repeats itself twice—first as tragedy, then as farce.

To this mixed picture of social degradation, widespread corruption, citizen uncertainty, distrust of authorities, economic collapse and a pleasant Caribbean climate, we now have the problems associated with Legal Decree #288. It turns the island into a haven for international criminality by encouraging the jubilant entry of this type of scavenger investor, who stalks opportunity and enjoys political connections while undermining the treasury of a people who have as their only bait no illusions.