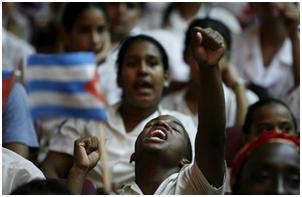 Exactly how do minors become affiliated with the Committees for the Defense of the Revolution?

When you turn 14 years old they begin contacting you and requiring your presence at meetings of the organization and volunteer works. The parents (legal guardians) don’t have to consent or reject it. Consent is implied, there is no legal formality.

You do not need written parental permission. They (the parents) know that for their children to survive and to “be someone in life” they need the endorsements of each of the organizations. They also need  it. The experience is passed down from generation to generation.

They don’t object when they are asked to pay the price for their minor child. Even, as is often the case, when dad or mom are required to be present at the meeting. Keeping up appearances is a matter of necessity.

They know that the CDR can’t solve the problems of street lighting, the water supply, or the transport situation. But they are aware of how much damage can be done by a negative opinion from the chairman of the committee or the monitors.

The home of these “leaders” is an obligatory reference for the repressive agencies of the government: National Revolutionary Police (PNR), State Security (DSE), Department of investigative work (DTI). They are the ones that confirm to the state whether you own a building or car, or intend to leave the country. Their assessments affect the determination of a sentence.

Legal guardians are aware of the consequences of refusing to be quoted by the child or publicly declaring that they disagree with joining the ranks of the organization, because they are minors, and as such, have no capacity to act or economic independence.

It’s like a rooted custom. The organization brings together all the ‘mass’. As the body grows and renews itself be incorporated into the process. It is one of the tools used in building the new man.

It starts in pre-school with the Pioneer guards, and continues with the incorporation into the  many social and student organizations that the system has. In everything they ask you to be loyal to the “Revolution” and to sacrifice for it.

However, I can assure you that less than 1% of the members of the CDR know the rules of the organization. The important thing is your commitment, not what you are committing to. They don’t care if you consent to the rules, nor if you comply with the obligations assumed.

I watched as a daughter voted for her mother who was on a mission in Venezuela, at the request of one of the leaders of the committee, who wanted her polling station to have 100% turnout at the election. Also, as the mother of a judicially-declared incompetent, she paid her daughter’s fee in the CDR and as she (the daughter) exercised her right to vote.

The saddest thing of all is that most citizens are not aware of this situation. For them it is normal. We are a people with a general education, but legally illiterate.