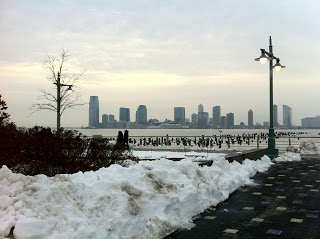 THE WAILING OF THE HUDSON RIVER

Why does it wail, do you know?

The Hudson River wails at dawn. It makes like a low curve underneath the bridge or against its columns and then its metal waters arrive up to the terrace where I take cover from the cold that comes from the most ancient New York (city of a thousand films in my provincial imagination). And where a little bit of a Havana fled, that tried and tried, but still won’t die in my soul.

It would be cruel if at these heights of the dis-history my city wouldn’t let me forget her. I am a man. I lived in her for 40 years. It’s time to rest now. I’m exhausted. My eyes are so sad from so much seeing and seeing, without you looking at me. Even the colors have changed, like the afternoon that puts itself out from pure tedium. It’s time to rest. Havana, listen to me, please. Stay the fuck back.

If the Hudson River didn’t wail of doomsday at dawn, I would have to pull my head out of a 19th Century brick building. There are such beautiful and free people in this city. They look for you with a certain light of hope. Spring doesn’t manage to distort the jewel grey of Washington Heights and its desperate terracotta facades. This neighborhood all at once reminds me of the Lawton of my childhood. I know I don’t know what I’m saying, but it’s true. I had 40 years built up living secretly in a corner of the planet like this. A slice of insanity. A vision, a mirage. Miracle. Come along now, you.

The little glass-coffin windows filter voices coming from the floor below or the next state of this super-country. At last, after having counted so many stars and adding one more for Cuba (I grew up around these kinds of jokes), I don’t know how many shine in the blue rectangle. The US flag, let’s say it before it gets any later, is one of the most precious in the world. By some miracle, I prefer the Cuban, I don’t know why. Perhaps it’s because of its sensation of geometric imbalance or incompleteness.

I’ve seen beggars covered with circus tarps in New York and in Washington (I’m going to come to stay and live in Washington when I feel that my heart won’t die: it’s not a city, it’s a stage, and I love spaces that overflow their own extensions). Very few beggars, but I’ve seen them just the same. Many times more swarm in the streets of downtown Havana, and they smell worse. It’s just as cold and the night is long. I sympathize. I think I don’t have money enough to even buy one of those tarps. I’m a mannequin recently departed from the hands of a State that no one stops talking about here. I am in New York somehow only for that: to disown myself of all possessions and stay like the dream of a simple voice. The voice of those who indeed have a voice and are now about to lose it forever in a mock country. My country, a deal between the high powers of crime and the economy and the purple boasting of those who believe in incubating God in the archbishopric. And my voice, you know well that it’s your voice because so it has always been, brother, from Cuba. Your voice from Cuba where you shall want what you might be and shall now never return to listen to it, my love.

Hudson River, howled by Steppenwolf. There is a fury of end of the earth in me tonight that requires me to chew the glass from the windows, rip curtains, and business up out there, and sink myself in the trachea of a subway that reminds me of the dim light of Route 23. In the cafes the neighborhood girls are all left-handed and read A Streetcar Named Desire for hours. I click the arrhythmia of an anti-academic counterrevolution, as intolerable on the island as it is in exile. Inmanipulable, for that matter, intoolerable. Let me go home. And I go.

And my home turns into being my body, housing a frightened mind. It’s obvious that the government is hunting us crassly, tuning their aim as if we were ducks fleeing in the spring. And we are. A night in 1900-something, three days ago, I saw ducks in the frozen water of the monolith in Washington. I also saw a mistake in the Lincoln Memorial. I saw smoke in the sewers. Special pins from the State Department. And a loneliness of staff meetings that held me with pain to my bones until someone said something to me and laughed afterwards, restoring the order of things in the universe. The universe as a billiard ball, rolling as a vile buffalo.

Sometimes it howls. Wail. World Wide wail that makes the Hudson indistinguishable from an ambulance (those ambulances of the soundtracks with saxophone and sex that I used to see when I lived there, on the other side of the bay and the sky with microscopic flakes from the end of winter).

All writing is a farewell to mourning. New York is preparing itself for our slaughter. We are going to annihilate the Cubans. The desert must rule, life is a leftover. I’m announcing it with a gushing pleasure that will not explode on you. In more than one sense, until the last Cuban does not die violently, Fidel Castro will not know how to die.

(This last prayer is the most intimate crystallization of the beauty exposed before the dismay of those who don’t know how to hear. Then hear me, my characters: Ipatria, Olivia, Sally, finally …)

I’m going to stop. I’ve spent many days without being able to add an image to my madness. I’m trying to invent words. Other names for another novel. Rosemary, Samantha, Kate. Always girls without end … of boys I wouldn’t be able to write even a dialog. The boy is me and I’m dissolving more with each period.