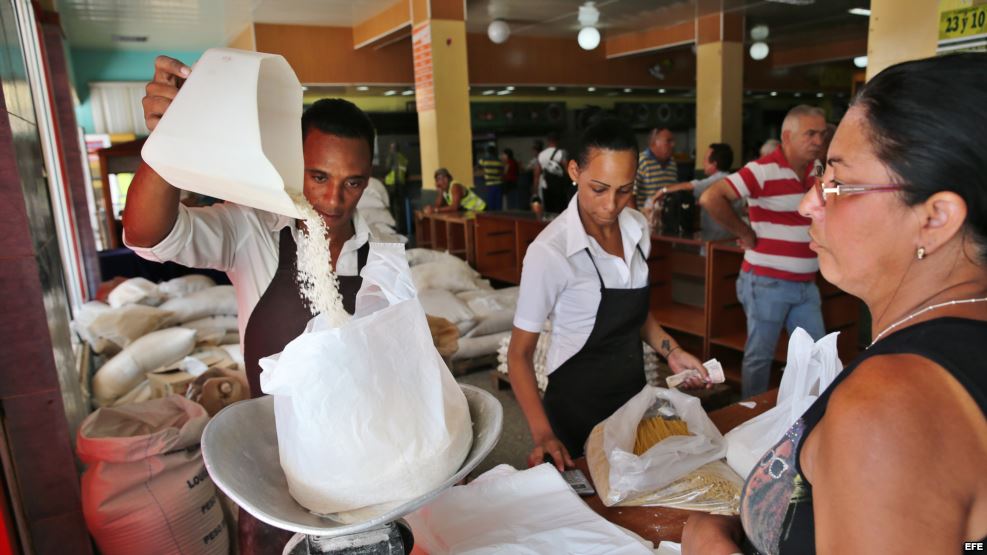 Juan Juan Almeida, 22 December 2016  — Sad, paradoxical and irresponsible — but real. Rice, the common denominator, and basic ingredient, of Cuban cuisine, could be almost absent from the island’s tables at the end of the year.

The official press has already started its plan of offering free publicity for the dinner parties which will be celebrated the coming 24th and 31st of December and January 1st in cinemas, cultural centres, social circles and theatres on the island.

The idea, as they explain it, is to guarantee family enjoyment and dining during the Christmas period and, fundamentally, for the coming of the 58th anniversary of the triumph of the Cuban Revolution.

For that reason, they have doubled the work schedules for catering units and restaurants belonging to the government commercial chain.  They will arrange exceptional supplies to livestock markets and local market places, and they are  planning the sale of foodstuffs, from a variety of crops to different types of meat. But … is there the productive support to achieve this aim? As far as rice is concerned, no.

One of the directors of the agro-industrial company “Fernando Echenique Urquiza” made the point, in the national press, that, although in 2016 the production of rice was much higher than in previous years, he could not get hold of a good supply.

The government official blamed the problem on the early maturing of the crop, but another worker in the sector proposed other explanations:

“During the rainy season, we had a lot of rain, which helped the crops”, was the rice expert’s explicit and clear explanation.

“It’s true that it was ready early, but there are other factors which also have a negative effect, and not only in this harvest” he said.

“The country has developed an important investment programme to increase rice production nationally.  Agreements have been signed authorising credits from the Import Export Bank of China (EXIM) for the purchase of medium and high-powered YTO tractors, and financial arrangements for the promotion of the national rice-growing agro-industry. We are setting up new irrigation systems, repairing dryers and mills. Modern seed-processing factories have been built and advanced equipment and technology has been purchased.

“But we still cannot depend on a sufficient fleet of vehicles to transport the product from the farm to the dryers, and to the stores, let alone to the markets. Nor do we have enough combine harvesters. And the dryers both here in Mayabeque province, and nationally, do not have the capacity to deal with a good harvest. And all of that is without taking into account the ridiculous price paid to the farmers for the demanding task of producing the grain which is irreplaceable in Cuban cooking”, said the expert.

As a last resort, the government has had to make up for negligence and inefficient production with last-minute imports, taking a hit with the purchase price, which, in turn, has a clear impact, especially at this time of year, on your average Cuban table.

Nevertheless, in spite of all these difficulties, for all Cubans, this is a Christmas to celebrate.