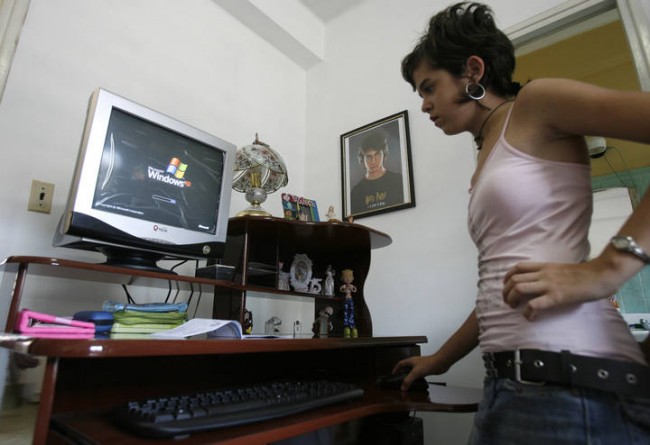 The creators of Revolico define it as “a small and functional team of programmers who one day felt the urge of a more simple way, organized and efficient to advertise and review what other people were already advertising”.

It was born in 2007 and nobody knows for sure who manages a web in which you can find almost everything. It runs at full throttle, without government permission. Around two million advertisements have been seen on a monthly basis.

Dalia, an engineer, was repairing her home and in the black market couldn’t find aluminum windows. “I went to the site and found there Revolico offers that pleased me. In addition to the windows , I bought ceramic tiles for the bathroom floor”.

Rigoberto, a musician, before wasting a whole afternoon digging in the foreign currency businesses, prefers to check first Revolico’s ads. “Rarely can I find what I look for in the State stores. Through Revolico, I have been able to buy my musical instruments.”

Among the usual visitors to this retail web site, you can find people who are looking for the latest cell phone models, computers and their parts and equipment. It has become a benchmark for the acquisition of goods for sale at a lower price than those in the foreign currency market.

Although the prices are not cheap. This virtual store is governed by offer and demand. At this time of the year, you can find an air conditioner of a ton of capacity for 470 dollars.

If you wait until summertime most probably you will end up paying around 600 dollars for the same model. People speculate that may be an online business with the government approval, but the constant blockades to the site deny this rumor.

In the island, there’s a doubt over who is behind Revolico. Richard, a guy with an iPod always hanging from his neck, is one of the programmers that keep the on-line retailer running.

“Our server is overseas. The rest is easy. The internet surfers offer their goods and for a reasonable fee we posted on our site. The portal had a tremendous growth, it already has cars and real estate. We are bothering the regime because we are out of their monopoly and control”, points Richard.

A government official said that the Cuban State use to block the page because ignores the source of a lot of these products.” We have proof that some of the goods for sale are presumably stolen goods from the State warehouses”, he indicated.

It is difficult to verify the source. But the web site managers made very clear that it is forbidden to post advertisements about jobs and exploitation of minors or any link with sex and money; drugs and narcotics; prostitution and pimping; terrorism; any kind of weapons as well as religious or political propaganda.

In spite of these prohibitions, Richard doesn’t believe that the Cuban government will legalize such a transactions, even imposing taxes on them. In a country where the internet connection is not bigger than 4 % of the population, the Revolico.com effectiveness is a real remarkable event.
Cuba is the illegalities Mecca. Because of all the absurd barriers, people manage to go around them. Either trafficking shoddy merchandise and money using “mules” from Florida. Or creating virtual sites like Revolico.com.

The elderly, used to the long lines and the long walks under the burning heat of the sun, are not persuaded of this a little bit exotic way of buying. They prefer to see and touch the merchandise.

For the young people, knowledgeable in the ample possibilities of the internet, it is an effective way to get the goods that the State don’t offer. Like Saul, proud of his Toyota Yaris thanks to Revolico.com.

Photo : Reuters. Young woman from Havana, Cuba, turns on her PC to buy in Revolico.