HAVANA, Cuba , November, www.cubanet.org – As we have said on other occasions, the daily life of the elderly in Cuba is a great challenge. Confronting every day the lack of money, scarcity of food, difficulties in receiving medical care, and bureaucratic obstacles imposed by the Government, among other problems, make the last years of our existence difficult.

Our archipelago is among the fifty countries of the world with the highest proportion of people over sixty, which represents 17% of our population. Most are retirees or pensioners; despite this, the State is not about to assume a truly effective policy to improve the lives of citizens in the “third and fourth age.”

For pensioners, the monthly pension is an agony rather than cause for jubilation. In Cuba, your pension can be collected in banks, the post office, the CADECA currency exchanges, or through magnetic cards on a designated day of the month.

The magnetic card often becomes a problem. Many times the ATMs are not working, or there aren’t bills of all the denominations needed, or the cards are locked. 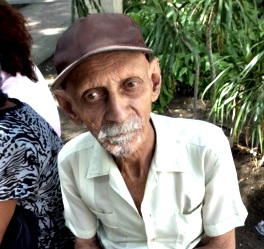 To Ramon, a resident who collects his pension from this system, once had his card locked at an ATM at Dolores Metropolitan Bank between 18 and 19 in Lawton. He says he will never forget that hard time, because he had to wait 12 days for someone to help him draw it out, as the sign said on the door.

Some, like Hilario, collect their pension at the post office. According to him, they allow the check cashing there. Some time ago they had a courier to bring the pension to the house. He asked, but they didn’t have any personnel then and never has been.

But Jorge is not among those who can collect it at the post office, and as the bank is too far, he almost always goes to the CADECA, where the line is faster.  There, however, the downside is that sometimes there is not enough cash. Last month, for example, after two hours of waiting, he had to leave because the money ran out.

At the CADECA at Dolores and 13th, in Lawton, there are generally two separate lines, one to collect pensions and one to change money. However, a few days ago there was a single, immense and slow line, because they were only paying at one window. Until a man passed by on a motorcycle and made a sign very significant in Cuba which consists of touching your shoulder with two fingers (it was a warming that a boss or some important official was coming). Not three minutes had passed when they started working three windows.

In the bank, on the other hand, although there should be no risk of running out of money, the line becomes slow for this same issue of management. For this reason, those who seek to collect their retirement must spend long hours in the street, on their feet, in the sun or rain. Sometimes an elderly person faints; it’s not uncommon for them to have had nothing more than a sip of coffee.

Panchito is one of those who collects at the bank. Yesterday he was soaked because it was raining and he didn’t find any shelter. And, like very month, he complained the pension isn’t even enough to eat, and says that’s why he plays the lottery.

Felipe, 84, waits in line all night to be the first to collect. He pays his installment payment on his fridge at the bank, then he pays the electricity, and runs his errands for the month. And the pension is gone. He confesses that he survives the rest of the month doing a little carpentry.

La China, a good-natured neighbor, adds that collecting her pension is difficult, but it’s harder to see how it flows out of her hands almost before she even begins.