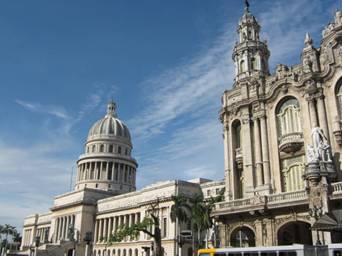 The grand colossus, a distinctive symbol of the city, remained sleeping, down on its luck. For decades dust and grime covered all of its enormous, solid structure. One day it suddenly woke up; its long-awaited moment had arrived.

Construction began during the Machado administration on one of the highest points in the city — on land where the city’s first botanical gardens originally sat — based on plans drawn up by the architect Eugenio Raynieri Piedra. Three years later, at its opening on May 20, 1929, the great neo-classical building became home to the Senate and House of Representatives and later one of the capital’s most distinctive landmarks. The period from the early decades of the 20th century until the 1950s is considered its most glorious era.

After 1959 this beautiful structure was subjected to extreme and unfortunate alterations, pillages and disastrous adaptations which gradually transformed it into the forlorn spectre we see today. Bats now shelter in its beautiful colonial chambers and fecal refuse is there to be admired on the walls of the emblematic building.

Of the many well-known stories that captured the popular imagination was the theft in 1946 of the 25-carat diamond that marked Kilometer Zero of the Central Highway. It is said to have reappeared a year later in the office of then-president Ramón Grau San Martín. It was re-installed in its original location and surrounded by an eight-pointed star crafted from Italian marble of different hues.

In 1973 the diamond was replaced with a replica. It now sits in the vaults of the National Bank of Cuba. Another restoration involves a recently discovered site that was created to honor the Unknown Mambisa Warrior. It is located directly below the cupola and the feet of its great gold-plated bronze statue, which measures seventeen feet tall and symbolizes the Republic. It is believed to be the third tallest indoor statue in the world.

The city’s official historian, Eusebio Leal, has indicated that fortunately there is no evidence of structural damage to the building. But when it comes to building’s internal systems, there are in fact many problems. At this point in time restoration of the great cupola is well underway. Work has also begun on the  patios and garden areas, which were designed by the famous French landscape architect Jean-Claude Nicolas Forestier, who also designed much of Havana’s Vedado neighborhood. Similarly, the two statues flanking the grand stairway — those of a man and a woman — are being cleaned and polished. These sculptures, as well as the one symbolizing the Republic, are the work of the famous Italian sculptor Ángelo Zanelli.

Soon the Hall of Lost Steps will be returned to its former glory. The final touches are being given to all its fittings, furnishings, curtains as well as to other valuable objects such as its lamps, some of which were made by Saunier Duval Frisquet in Paris, while others were gold-plated and fitted with glass at the Societé Anonime Bague. Their value is incalculable.

All the minute details of the restoration are being carried out by specialists who work for the city’s Office of the Historian as well as by freelance artists working in collaboration with the office. The latter are currently at work restoring the bronze bas-reliefs panels adorning the Capitolio’s large main doorways.

Once restoration work has been completed, the Parliament will return to its former home. In addition to its governmental role, the doors of the Capitolio will remain open to the public, who will have access to spaces such as the Hall of Lost Steps and the library, whose walls are paneled with rare hardwoods similar to those found in the Vatican library. As Dr. Eusebio Leal might well say, “this is the restoration of a memory.”