In the Plaza de la Revolution they erected a few years ago a statue of Camilo Cienfuegos, a hero of the struggle against Batista, who enjoyed great sympathy and popular support and who died in an accident in October 1959. Camilo is undoubtedly a national icon, but it seemed excessive to modify the building of the Ministry of Informatics and Communications, leaving almost half of its offices without windows, sacrificed to the plaza to place a “twin” sculpture to that of Che placed decades ago, which presides over an original wall on the facade of the Ministry of Interior.

From the monument to Marti you can see both, and in an effort to match them there is a signed statement at the bottom of each sculpture. 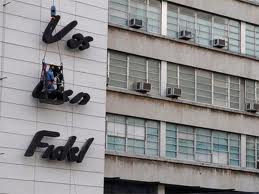 I don’t doubt the phrase, “Hasta la victoria siempre!” — Onward to permanent victory — was written by Che, but the phrase, “Vas bien, Fidel” — You’re doing fine, Fidel — raised my doubts. For many years Fidel’s famous question — “How am I doing, Camilo?” — has been raised in tributes to the disappeared commander without anyone mentioning the response, that is now perpetuated (or better said, perpetrated) in metal in front of everyone.

I’ve talked to people who heard that speech of January 8, 1959, delivered at the Columbia army base, and no one remembers the answer. I read the speech, recorded in the stenographic record of the office of the Prime Minister, where anonymous responses are mentioned, but there is no reference to the phrase imputed to Camilo.

I even had access to a first-hand version that said that Camilo, behind Fidel, was conversing jokingly while Fidel was haranguing the people, and the question was rhetorical, a way of calling attention to himself, as so many teachers to when they catch a lack of attention in a disruptive student.

Were descendents of spiritualists Alan Kardec or Blavatsky summoned to hear that answer? Only through the supernatural could the strength of a statement Camilo did not make in life be explained. And if, in this coda, he could not have been serious, nor has he been serious in approving a monument with an historical falsehood.

Regarding the speech, which I recently read for the first time, since that day I’ve always had a pigeon on my shoulder, I recommend that EVERYONE read it. It is not as long as those that came later. From it one can prepare a balance of promises and failures, much more accurate than a response from the great beyond.