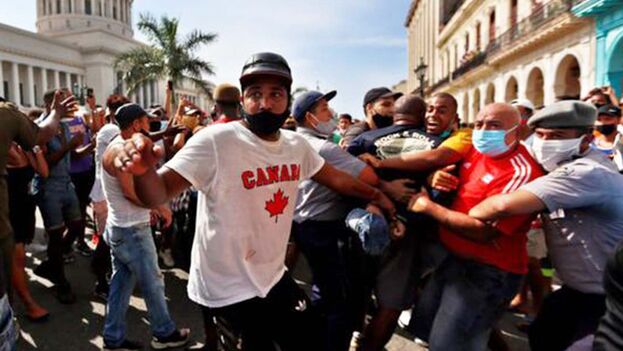 Police officers arrest protesters in front of the Cuban capitol in Havana on June 11. (EFE)

14ymedio, Havana, 3 December 2021 –Joe Biden’s intentions to partially modify US policy toward Cuba were frozen by the July 11 crackdown, Juan González, director of the National Security Council for the Western Hemisphere, revealed in an interview with NBC News.

“After July 11, we pressed the pause button,” said the senior official, who considers the date of the anti-government protests a before and after. “Even the Cuban Americans who were in favor of the compromise said: ‘We have to wait, pay attention to this moment and see how to move forward from here’.”

Biden’s adviser attributed this pause to the US president’s “strong commitment to human rights and democracy… He is not one of those who thinks that change will come by simply letting things go.”

That July 11, when the Government of Cuba suspended communications on the island to try to prevent the circulation of information, Washington promised to study how to provide free internet to Cubans, an announcement that was technically almost impossible to comply with, as experts in their day already warned and Juan González admitted in an interview with NBC News.

“There is no really technical and easy solution, nor is there the technology to have internet connectivity, so we should focus on circumventing censorship,” he said after ensuring that the US Administration has invested a large amount of time studying the possibilities.

During the presidential campaign, Joe Biden and Kamala Harris pledged to reverse some measures adopted by Donald Trump with respect to Cuba, including the lifting of limits on travel and remittances.

Although the Plaza de la Revolución expected a restart of the thaw, the commitment did not go beyond that, but not only has it not materialized, but some new sanctions have been added against specific individuals, such as the suspension of visas for nine Cuban officials after the repression of November 15.

González was asked about the realization of the election commitments, but the official was vague in his answers and again resorted to the phrase that the US Government has repeated most often in relation to the Island. “We are analyzing all the politics,” the official insisted, adding that, according to Washington, “it is a regime that is afraid of granting greater rights and even of starting a debate.”

Regarding remittances, the official said that they are studying “innovative options” to guarantee that the money sent to the island by Cubans’ relatives does not fall into the hands of the military.

“How can we use remittances to support citizens without [the regime] benefiting from this? Much of the focus is on sanctioning people,” he said.

In addition, he advanced that they hope to resume normalized consular activity at the Embassy in Havana, but without giving deadlines. Cubans must apply for their visas in Guyana since the staff in Havana was reduced in 2017 due to the appearance of numerous diplomats affected by the “Havana syndrome.”

González also stated without giving more details that Washington and Havana have had “private” conversations about shipments of vaccines, oxygen and healthcare materials related to the pandemic, thus denying the accusations of the Cuban Foreign Minister, Bruno Rodríguez.