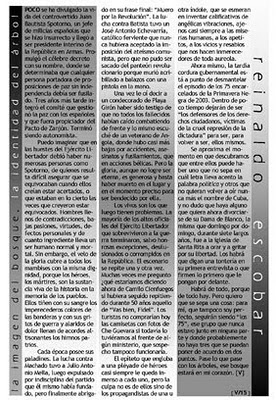 The image of the forest, the identity of the tree

LITTLE has been revealed of the controversial life of Juan Bautista Spotorno, a commander of the Spanish militia and led an insurrection and became acting president of the Republic in Arms. He issued a famous decree that bears his name, that provided that any person bearing a proposal for peace without independence would be shot. Three years later he joined the committee that negotiated the peace with the Spanish and that led to the Pact of Zanjón. He ended up being an autonomist.

I can imagine that in the ranks of the Liberation Army there must have been numerous people like Spotorno, about whom it is difficult to be sure they were wrong when they thought they were right, or that they were right at times when they thought they were wrong. Men full of contradictions, passions, virtues, personal defects and that ingredient that makes a human being normal and mortal. However, the veil of glory that covers all the mambises with the same dignity, because the heroes, the martyrs, are the what keeps the story alive in the memory of a people. They stained with their blood the timeless colors of the flags, and with their war cries and screams of pain they filled the high notes of the national anthem.

Every era has its paladins. The struggle against Machado had Julio Antonio Mello, later expelled for indiscipline from the party he himself had founded, but finally sheltered in his last words, “I die for the Revolution.” The fights against Batista had José Antonio Echevarría, a fervent Catholic who had never accepted the imposition of communist atheism but who could not be exiled from the revolutionary pantheon because he died riddled with bullets with a pistol in his hand.

I once heard a decorated veteran of the Bay of Pigs say he had witnessed that not all the dead had fallen in combat at the front and I heard the same from a veteran from Angola, where almost more were killed by accidents, murders and executions, than in combat actions. But the glory, even if not eternal, is generous and it is enough to have died in the right place at the right time to be blessed by it. The living are the ones who then have problems.

Most of the senior offices of the Liberation Army who survived the war ended up, with few exceptions, disillusioned or corrupted by the Republic. This scenario is repeated over and over. I often wonder what we wold be saying now about Camilo Cienfuegos if he had kept repeating, for fifty years, his, “You’re doing well, Fidel.” The tourists would not be buying shirts with photos of Che Guevara if he were still heading up some ministry which I suspect still wouldn’t work. The epithet that encompasses a host of heroes almost always makes each one a great figure, but the fault is not theirs but that of the propagandists of one kind or another, who strive to come up with angelic characterizations, almost always far from human miseries, the appetites, vices and bad habits that make us unworthy of and aura.

Right now, overdue government sanity is about to dismantle the episode of the 75 imprisoned during the Black Spring of 2003. Before too long they will cease to be “the defenders of civil rights, victims of the cruel repression of the dictatorship,” to be, to become again, themselves.

The time is coming when we will discover among them one who doesn’t know which letter gets the accent in the word política, or others who never want to hear the name of Cuba again, and no doubt there will be one who wants to divorce his Lady in White, the same one who Sunday after Sunday, over seven long years, was at Santa Rita church praying and shouting for his freedom. Some will say some stupid thing in their first interview, or sign the first thing put in front of them to get ahead.

There will be something of everything, because everything is there. But I want one thing known: for me, who is not perfect either, you will continue to the “The 75,” that group that never went anywhere together and among whom there are probably not three of you who can agree on two points. Whatever happens with the trees, the forest will be in my heart.