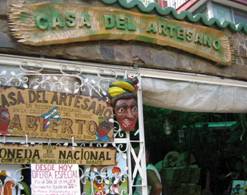 The most recently approved regulations which now govern self-employment (private labor) prohibit the sale of manufactured goods. Henceforth, budding private businesses may sell only hand-made goods. Applying such obsolete rules in the twenty-first century is akin to feudalism and amounts to a return to a pre-industrial era.

Meanwhile, the government purchases shoddy goods at clearance sale prices from China, Vietnam, Brazil, Mexico and other countries. It later offers them for sale in its hard currency stores at exorbitant prices which are several times higher than their original wholesale costs. This puts them well out of reach of most Cubans and creates a monopoly in the sale of manufactured goods.

Many years ago, at the beginning of the experiment, its chief inventor said, “This is the revolution of the poor, by the poor and for the poor.” It seems to have quickly lost direction, becoming instead a behemoth which threatens the poor, one which does not allow them to either develop their initiatives or get ahead.

Never before in Cuba’s history as a nation has a government manipulated and abused so many of its citizens. Cubans have endured family separation, persecution for political, religious, sexual and even musical preferences, as well as a decades-long prohibition against travelling abroad, buying or selling a home or car, or staying in resort hotels.

Cubans have had to endure poverty-level wages and pensions. Professionals have been contracted out to other countries as slave labor. Cubans have served as cannon fodder for foreign wars, have suffered the loss of moral values and have been subjected to inflated prices for both basic commodities and non-essential goods. They have had to put up with low-quality social services, denial of home internet access, press censorship, repression of freedom of thought, and so on.

José Martí warned us of this but we did not take heed. He cautioned that socialism poses two dangers: the first stems from misunderstood and incomplete readings of the works of foreign writers; the second from the arrogance and repressed rage of ambitious men, who rise up by standing on the shoulders of others, pretending to be ardent defenders of the helpless (Collected Works, volume 3, page l68, published in Cuba).