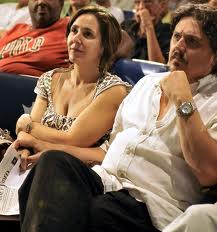 In geology, a fault is a discontinuity that is formed by the fracture of the surface rocks of the earth, when tectonic forces exceed the resistance in these rocks it causes tidal waves and earthquakes. The same thing happens with power; readjustment is accompanied by apparent cataclysm.

In Cuba, the punishment, harassment and expulsion campaign for foreign businessmen based in Havana started in 2005, days after the General Raul Castro, his entourage and family, returned from a tour of Spain and Portugal, where they had gone as guests by the grace of a man named Amerigo, not Vespucci but Amorim, who is, according to Forbes magazine, the richest man in Portugal; his fortune amounts to 7 billion dollars.

Américo Ferreira de Amorim long ago inherited a small cork factory founded by his late grandfather in 1870; today the Amorim Group is the largest cork producer in the world. A diversified emporium, ranging from oil to banking, textile, forestry, agriculture, real estate and tourism. They have representations in countries such as the Czech Republic, Romania, Hungary, Germany, Bulgaria, Russia, Angola, Canada, Chile, Brazil, Mexico, England, Netherlands, USA, and Spain.

Mr. Américo, a personal friend of Fidel and Raul Castro from the 60s, set up his company (Amorim Trading Import and Export SA) in Havana in the 80’s. Located at 6604 5th Ave between 66th and 68th in Miramar. Amorin, is principally involved in the provision of inputs for the Cuban ministry and industry of fishing. It finances major commercial operations of the Cuban government such as purchasing fuel, milk powder and frozen fish for the army and the population. It has the exclusive right to export Cuban seafood to the European market. With the French group ACCOR it maintains investments in the construction and management of hotels such as the Sevilla in Havana and the Punta Arenas in Varadero. Why does this company stands out above the rest of all foreign firms based in Cuba?

During the trip to Europe mentioned above, and over a platter with brie and raspberry jam, a perfect delight to the eye and palate, General Raul Castro asked his old friend Amorim, that for better enforcement of joint ventures (without specifying the meaning of “sets”), one person in particular should carry the reins of the Amorim Group in Cuba. Wish granted, favor paid. In 2006 Mr. José Guimares, a Portuguese businessman, and one of the oldest directors in the management group was replaced; by someone unscrupulous with ambitions and a bandit’s heart who knows the danger of betrayal. Paolo Titolo, Italian by birth and extortionist by profession, husband of Mariela Castro, Raul’s son-in-law.

Corruption in Cuba is a common practice that has always been present in the most inaccessible of the halls of power, and from there it descends, contagious. The flood of smugglers we’ve seen recently, cases of embezzlement we read about in the press, the diversion of resources, foreign firms dissolved, and the many officials who are publicly renounced or are sanctioned by an apparent anti-corruption policy, is no more than a smoke screen and temper tantrum by power to subtly hide the indecency of a brothel.