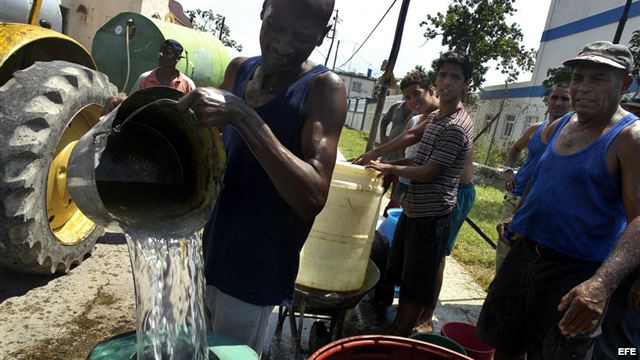 Without being very skilled in medical matters, and with onlyslight knowledge, I read that cholera is a very infectious disease, sometimes serious, produced by bacteria of the genus Vibrio. Itmanifestsas an epidemic where deficient sanitary conditions, overcrowding,war and starvationexist. And, its high mortality because ofdehydration is due fundamentally to the delay of patients in going to hospitalor to the lack of access to health services.

It was a sickness eradicated on our island, and according to information extracted by the Medical Sciences Information Center of the Matanzas Province, before this reappearance, the last cholera patient in Cuba was Manuel Jimenez Fuentes, who died of this illness August 3, 1882, when the island was still a colony of Spain.

Nevertheless, the number of people afflicted with this gastrointestinal infection exceeds four figures; and a well-informed friend from theMinistry of Health assures me that the institution expects this epidemic to affect more than 15 thousand people across the national territory because already the illness hascrossed the borders of the eastern provinces; today cases are reported in Camaguey, Santa Clara, Matanzas, Havana and Pinar del Rio.

The health authorities are urgently developing measures and, it is believed, a system of epidemiological vigilance over acute diarrheal illnesses. The international doctors arrived from Haiti have experience in treating patients with this disease. But this is not a task onlyfor the Ministry of Health; it should also include each and every one of the areas of government. They are all responsible.

It is true that with the absence of cholera cases on the island for more than a century, they managed to maintain in the population a low perception of risk; aside from the terrible conditions of national unhealthiness.

The fault, the abundant rains and high temperatures. In Cuba it has always rained cats and dogs, and the heat is geographic; the true cause is the lack of cleanliness, the lack of social awareness, and the inaccessibility of the population to information and themeans of prevention and keeping good hygiene. The epidemics are inextricably linked to — among other factors — the consumption of poor quality water, contamination, and thecrowding of the population in slums that lack basic infrastructure.

What is unfortunate and brazen is that Raul Castro’s government opts again for silence, complicity and deceit.

Why manipulate opinion and lie? Why say that they are working on the creation of a vaccine capable of fighting the epidemic if the available vaccines against cholera in the world only offer partial protection, 50% or less, and for a limited period (from three to six months at the maximum)? That is exactly the reason why immunization is not recommended, because it offers a false sense of security to the people vaccinated and, also, to the health authorities.

The most effective prevention in the face of an epidemic is personal and collective hygiene. Even so, this government applies taxes to imported hygiene and cleaning products, which makes them scarce, and basically they can only be acquired with convertible currency. For me, that is profiting from the health of the country; and in the penal code those are wellestablished as CRIMES AGAINST THE PUBLIC HEALTH.

I remind the General; for he who does not know how to lead, resigning is an excellent option.