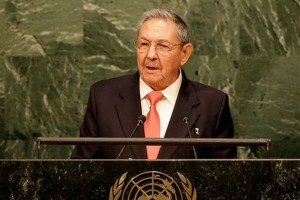 Cubanet, Miriam Leiva, Havana, 30 September 2015 – The organization United Nations organization is celebrating the 70th anniversary of its creation in a big way. The most important players in world politics and the dignitaries from the majority of its member countries met in New York. The 2030 Sustainable Development Summit, where Pope Francis gave his first speech before the UN, took place from 25-27 September, and the Conference on Gender Equality was held on the 27th. The high-level meetings of the UN’s 70th session began on the 28th.

Raúl Castro traveled for the first time to the United States as President of Cuba on 24 September. The General-President wore the halo of the reestablishment of diplomatic relations with the United States, the reopening of the respective embassies, conversations with President Obama, the constant flow of dignitaries from other countries and American visitors to Cuba, the mediation between Venezuela and the US, and participation in the meeting of Colombian President Juan Manuel Santos and the chief of the FARC-EP for the signing in Havana of their first peace accord.

The Cuban leader seemed to enjoy the influence of his constant accompaniment of Pope Francis during his Cuban tour—with a synchronicity developed during the papal facilitation of conversations with the US—and appeared to be counting on the symbolism continuing in Washington, New York and Philadelphia.

But the media stumble caused to the Supreme Pontiff over the detention of more than 150 activists from the independent civil society, among them three ladies who had been invited by the Papal Nunciature to greet him, uncovered the buried reality that in Cuba the same dictatorship from the last almost 57 years still exists; and it tarnished the arrival of Raúl Castro in the US, and his presence in the Cuban seat during the speech by the Holy Father before the United Nations on 25 September. Then he did not hear Cuba explicitly named for the negotiations with the US, nor the condemnation of the embargo/blockade, just as had not happened in the speeches by Pontiff previously during the US Congress joint session. The public greeting, and the Francis/Castro/Obama meeting that had been predicted by the media, did not occur.

Nonetheless, Raúl Castro saturated the UN as planned, to make up for his prior absence since assuming power nine years ago. He delivered speeches on 26, 27 and 28 September at the 2030 Development Summit, the Gender Equality Conference, and the high-level segment of the UN General Assembly, consecutively.

The General held meetings with: Bill Clinton; the Prime Minister of Sweden; Ban Ki-Moon; the President of Guyana; Vladimir Putin; Xi Jinping; Lukashenko (the dictator of Belarus); Francois Hollande; Democratic senators and representatives; the president of the US Chamber of Commerce and CEOs of major corporations; the Governor of the State of New York, Andrew Cuomo, and the mayor of the City of New York, Bill de Blasio; as well as other personalities. Also, diplomatic relations were established with the Marshall Islands.

During the inauguration of the 70th Session of the UN General Assembly, on 28 September, Obama reiterated that the policy maintained by the US towards Cuba for 50 years had failed in bettering the lives of the Cuban people, that the US will continue having differences with the Cuban government, and that it would defend human rights—but that it would deal with these matters through diplomatic channels as well as through increased levels of commerce and people-to-people ties (a policy initiated by President Obama in 2009).

He added that, as progress is made, he is confident that the Congress will inevitably lift “an embargo that should not be in place anymore.” He similarly reaffirmed that his policies have the same objectives, through other means: “Change won’t come overnight to Cuba, but I’m confident that openness, not coercion, will support the reforms and better the life the Cuban people deserve, just as I believe that Cuba will find its success if it pursues cooperation with other nations.”

Raúl Castro delivered a speech in Comandante style, albeit closely hewing to the brevity required in the UN (unlike Fidel Castro on 28 September 1960). He reiterated demands on the US for normalizing relations: elimination of the embargo, compensation for the embargo/blockade, return of the territory occupied by the Naval Base at Guantánamo, and the cessation of broadcasts from Radio and TV Martí.

That night he attended the reception hosted by Barack Obama for high-level dignitaries attending the UN—the first such occasion, since the reestablishment of diplomatic relations, in which he participated as Chief of State and Government at an official activity of the United States Government.

The presidents met the next morning, accompanied by their chancellors, Alejandro Castro Espín (Raúl’s son), and other functionaries. Later, [Foreign Affairs Minister] Bruno Rodríguez held press conference where he stated that the meeting had taken place in a respectful and productive atmosphere.

Regarding the detention of government opponents during the visit by Pope Francis, the minister responded that the Cuban government is proud of its record of achievement in human rights, that the exercise of all rights is guaranteed, that the laws and courts adjudicate and sanction according to the legal classification of behaviors, and that laws regarding foreign government agents in the US and European countries are much more severe.

This answer constitutes a warning that the Cuban government continues to categorize all opponents as US agents, and that it could go back to using Law #88 of 1997, on “Protection of the National Independence and Economy of Cuba,” for which they sentenced 75 peaceful individuals to terms of up to 28 years in prison. Twelve of those so condemned are still in Cuba on parole.

The world has opened up for Raúl Castro. How he will fulfill his promises remains to be seen. He cannot forget the “disposable ones”: almost all the people of Cuba.