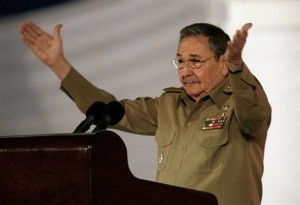 The man who as a child liked to play with toy soldiers, and now is General of the Army and President of Cuba, turned 80 on June 3, 2011. Raúl Modesto Castro Ruz has just entered the club of octogenarian Cuban leaders.

He was the third son from the marriage formed between the Galician Ángel Castro and the Cuban Lina Ruz, and, having been born with distinct physical features, one didn’t have to wait for the rumors about his real father. Speculation aside, the truth is that he always idolised his brother Fidel, five years older than he.

Since then, he has followed him everywhere and has been faithful to him.

But 52 years later, with the country socially and economically in ruins and with the hands of the clock against him, the younger brother knows that if he wants to save the revolution, a mountain of things have to be taken apart and re-done or made in a new way.

And there he is. Trying to paddle upstream. With too many elderly sailors, and very few young ones energetic and with fresh ideas. Although perhaps the greatest danger is not in the sea. But in the nearly 12 million Cubans stranded on land and whose patience may be about to end. The people are fed up of listening to Castro say, once and again, “Now we are going to build socialism.”

An unrealistic slogan, because everywhere socialism has failed. And as the chances of its construction on the island are almost nil, it would be welcomed if they defined it ideologically and began to build the foundations of capitalism. Asian or European style. But just take concrete steps — and fast — for Cuba to once again be a modern and prosperous republic, as it was before 1959.

A year ago, the Spanish journalist Vicente Botín, presented in Madrid, the book Raúl Castro: The Flea that Rode the Tiger. In the final paragraph, the author sums up a truth:

“A Chinese proverb says that ‘the best way to keep a tiger from devouring you is to ride on it.’ But in the salvation is the condemnation. The rider cannot dismount, because when he does, the tiger will eat him. Destiny sentenced Raul Castro to ride all his life on the back of a tiger and the tiger has devoured him, even though he never climbed down from it.”