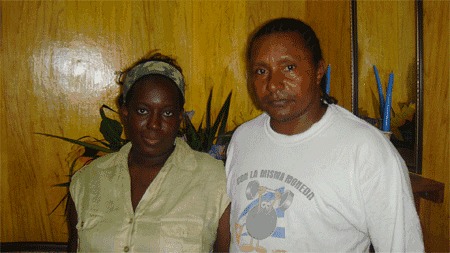 COMBINADO DEL ESTE, 28 November – In Cuba, “Free Territory of America,” there is a population of almost 12 million inhabitants. This entire population suffers terrible disappointments when their family members are taken to prison for fabricated reasons and without any proof; but it turns out that in various newspapers and magazines they have publications about the so-called Five Heroes, and the family of Ramon Labañino – one of the Five – have made statements about it.

I don’t know young lady, what story you have been told, but in the prisons where your father is there are things you can never do in the Cuban prisons.

For example, in the Cuban magazine Zunzún, there was a story where you and your sisters are at the prison with your father, and the magazine commented that they didn’t allow you to take cameras in; so who took that photo? You say they don’t allow him to touch you but in one of the photos he’s holding your hand.

Do you know how the prison regime works in Cuban prisons? Clearly no. Well, I’ll tell you and we can compare the two systems.

For your information, in Cuban prisons there are also political prisoners; in the prisons of Cuba they torture and kill; there are thousands of inmates suffering constant attacks by the guards, and no executioner has paid for his crimes.

In the prisons of Cuba, and particularly in the maximum security Combinado del Este prison, the food is scarce and of poor quality; sometimes it is even rotten.

In the Cuban prisons they don’t let family members bring food to the visit, mayonnaise, hot dogs, pizzas, sweets, oil, ham, rice, much less meat and natural homemade juices. The letters to your children, wife, or other family members can’t be taken by them, you read them to them and then tear them up.

The human conditions are appalling; the hygiene worse. Privacy is violated, because they search even your genitals after a visit. We are all humiliated and treated like animals. Just like the Nazis did in concentration camps.

It could be that your mom hasn’t told you about the terrorists who planted the bombs in the Bodeguita del Media and the Copacabana Hotel, where some Italians lost their lives.

Because, young lady, Chávez Abarca y Cruz León — authors of this terrorist act — are in Combinado del Este prison in Havana, and they enjoy conditions that we who are Cuba, legitimate children of this earth that saw our births, don’t have.

They have telephones in their rooms, fans, fridges with cold water, good quality food and get high quality medical care from a good medical commission, while we can die and a doctor doesn’t show up.

On the Round Table program, shamelessly, to denounce the bad diet suffered by the “five heroes” they explained that for more than a week they were eating chicken without potatoes, that there were no onions with the steak, and that the ice cream was melted.

To us, Cuban prisoners — especially the political prisoners — we have potatoes without chicken, onions without steak and we’ve never seen ice cream here; but fine, most Cuban citizens can’t enjoy these foods.

Six pounds of sugar, half a pound of oil, seven pounds of rice, 10 ounces of beans, a 90-gram bread per person, this is all that the “Benefactor State” can guarantee its people on the ration book for more than half a century.

What irony! In 2000 Fidel Castro proclaimed that of all the projects he was most passion about that of converting prisons to schools, because it is the most humane, the most just and socialist; but it seems that Fidel Castro brought his project to fruition backwards, and there are schools that have been converted into prisons.

Perhaps you know that State Security will not allow our fellow travelers in the cause to visit us in prison, and the Ladies in White  are brutally beaten for peacefully demanding the freedom of political prisoners?

Would you like it if you, your sister, your grandmother, your mom and other members of your family were beaten for asking for freedom for your father? I’m sure you wouldn’t.

Do you know that my wife, Sonia Garro Alfons — political prisoner and Lady in White — was injured in her left leg by a gunshot just for failing to agree with the Fidel Castro regime?

She is a prisoner; I see her every three months in a pavilion, that’s only 4 times in a year. They use this to punish us and the room they give us is that of those condemned to death or life in prison; it has iron bars and a locked aluminum door; also there are microphones and cameras.

Does it seem to you, young lady, that this is fair? What despair. The person who is writing to you is Ramón Alejandro Muños González, Cuban citizen, political prisoner and independent journalist; married father of 12 children.

Currently I am an inmate in Combinado del Este prison, condemned to 14 years of privation of liberty; and my wife, Sonia Garro, was unjustly condemned to 10 years in prison. Both my wife and I are heroes, but that’s not what your parents told you.

Note: This letter will be sent to the Council of State; the Round Table; the newspapers Granma, Rebel Youth, and Workers, and the magazine Calle del Medio; to the digital site Cubadebate; the radio station Radio Martí; and all the Internet sites that want to show solidarity with our cause.