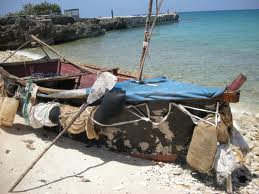 The neverending story brings back bad omens. An official note from the Ministry of Interior – issued through the newspaper Granma on Friday – brings up again the perpetual drama of the rafters. This time 18 people were rescued off the coast of Palmarejo in the municipality of Santa Cruz del Norte, in the western province of Mayabeque, from a group that illegally set sail on a rustic boat in late November from the north of Artemis; five people were also reported dead.

The Camarioca crisis in 1965; The Mariel Boatlift Crisis in 1980; the sad crime in Tarara in 1992; the tragic sinking of the “13 de Marzo” tugboat with its 41 lost souls, including 10 children; and the rafter crisis, including the Maleconazo in 1994; the human drama of Elian Gonzalez; the attempted hijacking of the Regla ferry, with its resulting summary executions, in 2003; to mention only some of the most notable events of this mournful saga, and taking for granted that the actual number of the tens of thousands of Cubans who have died in the Florida Straits may never be known.

All these episodes in our recent history that have profoundly affected generations of Cubans, have something in common: They certainly would not have occurred if the Cuban government would provide us with legal mechanisms to travel freely abroad, as in virtually the rest of the civilized world. This is where the skeptics riposte “… but if you take to the seas as Dominicans and Haitians, and as Mexicans throw themselves into the scorching desert…” and I would notice some differences.

Those boats that capsize full of West Indians as well as the wetbacks who risk the coyote trail, are the absolute destitute children of an ancestral poverty that deprives them of any possibility of procuring through legal means — passport, visa, airfare — established in their countries to migrate to their destination, usually the U.S. and in the latter instance it is the country of destination which denied them a visa, but they are not subject, in principle, to a government ban on their travel to the rest of the world. They are people who if they had the necessary resources would never throw themselves into such a foolhardy enterprise.

However, in the Cuban case we have more than one rafter who in one way or another managed to get the required resources but was totally deprived by their own government of the right to travel, not only to the U.S., but to any other country in the world, even with that country’s visa, and this little detail distinguishes our rafters from almost all other earthlings.

While the controversial U.S. Cuban Adjustment Act, in force since the early 60′s, encourages the risk of illegally migrating to that country, it is also undisputed that has remained intact until this day sustained precisely our government’s absurd and systematic policy of closure. Although knowing the psychology of successive U.S. administrations and its consistent position on Cuba I dare to venture a prediction: if the Cuban government today lifted the ban and allowed its citizens to travel freely, the U.S. Congress would immediately reconsider its position and abolish or “readjust” the Adjustment Act, since it would no longer be useful to keep the perennial drip of illegal departures from the island with its respective media harvest – more convenient than a great exodus – and it would be forced, by restricting visas, to stop the first wave that would surely occur, but that through organized and legal means and would not leave the burden of deaths required for anti-communist lobby’s propaganda purposes.

Although there is something very true in this case: if, as a Cuban citizen, I have no right to compel a foreign government – whichever it may be and whatever its relationship with Cuba has been – to amend its legislation, I do, however have absolutely every right to demand that my government to do everything in its power to end this long trail of needless deaths, since the most heartbreaking is that they could have been avoided.

The travel ban acts as the central axis around which all these misfortunes revolve. I said it before and I repeat: the main factor responsible for the deaths of Cubans seeking to emigrate into the sea is, and always has been, the Cuban government’s immigration policy. It remains only to give it time… life will demonstrate it.