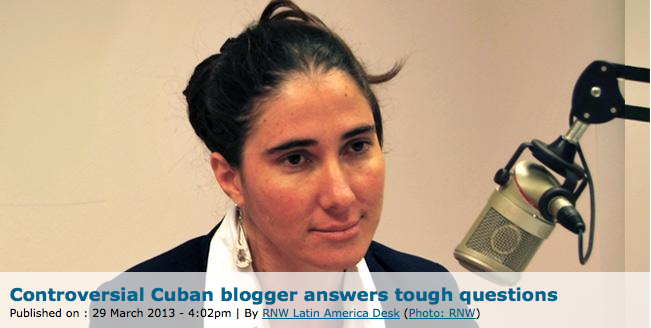 For over a decade, the Cuban government refused to allow one of the world’s best known bloggers, Yoani Sánchez, to travel abroad. When Havana finally loosened travel restrictions for Cuban citizens, Sánchez was one of the first to take advantage of the change, embarking on an 80-day 10-nation tour. One of the countries she visited was the Netherlands, a stopover arranged by Amnesty International and the Dutch film festival “Movies that Matter” .

Yoani Sánchez also visited RNW’s Latin America department at our new premises in Hilversum. She answered questions t readers had posted on our Spanish-language Facebook page web site. “I don’t feel like a hero”,  she said. “My knees tremble. I’m a coward who is trying to do something. These are times for cowards.”

Sánchez responded to dozens of questions posed by our worldwide audience.

Julio César Díaz in Chile: who finances your trips and luxury products?
I love this type of question because it helps me refute a lot of lies. I live in a country where you can’t ask those in power  a question like this. No one can ask the president where he gets the money to buy luxury products. In my particular case, I’m able to travel because of solidarity. I flew to Brazil thanks to the money I collected from Brazilian bloggers. I was then invited by academic institutions and humanitarian groups, such as Amnesty International and various universities in the United States. Everywhere I’ve gone, I’ve been fed, hugged and given a place to sleep. I’m going to Florida soon using a ticket which my sister has been saving up for for the past two years. So, that’s it basically: solidarity, solidarity and more solidarity.

Maruss Khievick in El Salvador: How much does the CIA pay you to promote your biased project, financed by the worst human rights violators in the world?
I haven’t received a penny from the CIA. I think this accusation is ludicrous. The day I find out that the CIA is planning to do something evil in Cuba, I’ll be the first person to condemn them.

Harold Tupaz in Colombia: Is there so much hunger in Cuba that you sell your fatherland for a McDonald’s hamburger?
I don’t like McDonald’s. I like pineapples and Cuban bananas. I think this question just adds to the confusion which I am trying to clear up. The confusion is that Cuba is about a single party, man, government or ideology. Criticising the government is not the same as criticising Cuba. Cuba is much more than that: it’s huge, plural and diverse.

Ana Brus in Holland: I went to Cuba in 2000. Has the country changed since then, and in what way?
I think it has. Cuba is changing, and the thing that gives me a lot of hope is that people are changing on the inside. More and more people dare to speak out and do things. Technology has helped a lot to bring about this change from silence to criticism. People are expressing themselves on Twitter, in blogs and through videos. These small changes in recent years are also creating a space for private initiative. People now think: ‘OK, I’m going to stay here and see if I can make a living through my own sweat’. So, yes, things are changing, not because of the politicians, but because of civic pressure.

Luis Chaura in Florida: Would you like to be the president of Cuba?
No way. I want to devote myself to journalism, to the media. I’d like to set up a newspaper. Besides, in the Cuba of my dreams, presidents won’t be important. Power will be transferred to the people.

Gabril Delpino in Cuba: what would you do if they barred you from returning to Cuba?
If they did, I would get on the first raft to the island. No one is going to prevent me from going back to the country where I was born and where I want my grandchildren to be born. The island doesn’t belong to the government.

Lázaro Díaz in Miami: After such a long journey and having complained so often, aren’t you afraid that the Cuban government might take reprisals?
Of course, I’m afraid of reprisals, but I’ve seen the monster’s face. I’m prepared.

Francisco Javier in Spain: Why is your blog’s server blocked at times and why isn’t it possible to speak about American policies in your blog?
It gets blocked because we’re the victims of a lot of attacks by hackers. This hasn’t been confirmed, but we believe that the attacks come from the University of Computer Sciences on the outskirts of Havana. In November 2012, my site was attacked 15,000 times in a single month. Regarding US policy, it was on the eve of the last elections, people were leaving comments on my blog expressing their support for one candidate or the other. So we said, ‘this is a blog to speak about Cuba’.

Raúl Cerverio in Spain: how much money would you need to make a newspaper in Cuba? Millions would have to be sent to Cuba, thereby partly breaking the economic embargo.
For a virtual newspaper , the only thing you need is talent and stories to tell. We have an abundance of both. I don’t know how that would translate in euros and cents, but it would need millions in terms of talent. We’re a team of people who want to tell our reality using the technologies at hand. It wouldn’t be a print newspaper, so it wouldn’t be very expensive. It wouldn’t be sold, so we wouldn’t get rich doing this. That’s the initial idea. As far as the embargo is concerned, everyone knows that I’m extremely critical of it. I’m not critical to help the Cuban government, but to help my country.

Martín Guevara Duarte: Freedom of expression, to read and associate, have to go hand in hand with the freedom to establish companies and trade. In China, people are free to make money, but the country continues to strictly control freedom of expression and the right to get involved in politics. In Cuba, Raúl Castro appears to be moving in the same direction. What do you think?
Yes, exactly. It seems that the government wants to create a model with a form of economic and political liberalisation. But for a number of reasons I don’t think it’s going to work. It’s taken them too long. They started going down this path very late. Cuban society doesn’t only want prosperity. It wants freedom of expression. The other reason is an unshakeable truth, a truth that’s like a stone, a mountain: the leaders who came to power during the revolution are dying off. I don’t think they have enough time left to introduce the Chinese model in Cuba.

Gabriel Delpino in Cuba: How did you lose your tooth? Is it true that that happened when you were in prison? A friend of mine doubts that version of events. She says you’re a drama queen.
I think we Cubans are quite melodramatic. Our national history is a mixture of that. Don’t forget that soap operas originated in Cuba. Fidel Castro used many dramatic touches to hypnotise the nation. Personally, I try not to talk much about my painful journey. It has been long and full of incidents. I prefer the path of joy.. all the wonderful events I’ve experienced. I lost a tooth when three female police officers were trying to forcibly undress me in a room. I don’t try to show off the fact that I lost that tooth. A smile is never incomplete. It’s a smile.