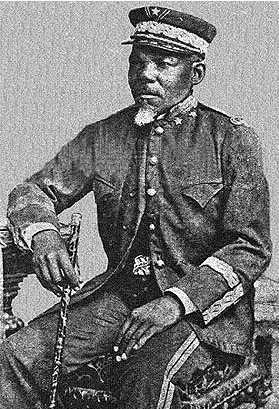 A victim of power, violence, social injustices and racism during the Little War of August of 1906 — generated by the conflict among the political elite of the age with the goal of the presidential reelection of Tomás Estrada Palma — Army General & Liberator Quintín Banderas Betancourt, a black freeman who gave 30 years of his life to the fight for the abolition of slavery and the independence of Cuba, was killed as one of the heroes of Cuban independence.

Black, of medium stature, physical force, with an easy smile and natural intelligence, Quintin formed his personality in the Santiago neighborhood of Los Hoyos. His work as a bricklayer from an early age prevented him from learning his basic letters. He traveled to Spain as a stoker and cabin boy on a boat where he learned the trade of marine merchant. He became a soldier in the Ten Years War and ended as a Division General. He participated in the invasion of Las Villas, in the Protest of Baraguá, in the organization of the Little War, in the War of Independence of 1895, and in the Western invasion of 1897. He was judged and separated from the service by a Military Council, but once the war was finished, the Hill Assembly ratified his grades of Brigade and Division General with retroactive status.

His insubordinations, related to his rebellious character, were produced in an environment vexed by racism and intrigue. Quintín, with quite brown skin, had as his bosses and subordinates white-skinned Cubans. Figures of the caliber of Calixto Garcia, for example, conditioned their participation in the war on the leadership being in white hands. The unquestionable is that General Banderas was one of the Cubans that put his country’s interests before his own personal interests. At one point he wrote, “Never did I think of the benefits that would come to me from war, only freedom directed my steps and to its achievement I have dedicated my youth, my comfort, my entire life.” The sad outcome of his life is connected with the racism and violence in the rough process of forming our nation.

Nations, the result of complex historical processes, reach their peak at the time when awareness of identity and belonging to different communities leads to a unique and stable community. In Cuba, this process is still not complete, was looming in the early twentieth century. Spaniards and Africans, transformed into Creoles and Cubans, accelerated their identity in the midst of war. However, the great differences in social, economic and cultural rights and opportunities, consolidated over several centuries of slavery, prevented the formation of a common purpose — still not achieved — to rise above the differentiating elements.

After the war, equality among Cubans, recognized formally in the 1901 Constitution, was not accompanied by practical measures to reduce the large gap between blacks and whites. For example in Article 13 read: “… every person may freely either learn or teach science, art or a profession, and establish and support education and training facilities …” However, in 1905, they were still trying to create a center for upper primary education and secondary education for young blacks who lacked financial resources to receive such instruction. As a result, blacks were still what they were before the conflict, just black.

The double discrimination suffered — by Cubans, as compared to Spaniards and by blacks as compared to whites — coupled with economic and cultural disadvantages, was reflected in the employments. Jobs in commercial establishments in U.S. companies (telegraph, telephone, electricity and sugar mills) and also in public offices of the state were virtually reserved for whites, while blacks had to work in construction, agriculture and some other trades . The best evidence of this was the creation of republican armed forces, where blacks, who had constituted 60% of the fighters of the Liberation Army in 1907 were less than 15% of soldiers and police. Blacks moved from war heroes to unemployed in the Republic.

In such an unfavorable environment, the General of the three wars sent letters, requested interviews and tried to fill vacancies without results. The New Creole of August 25, 1905, published, as an example of racial discrimination, the refusal of President Estrada Palma to receive him. Sometimes forced to work as a carter and others in a section of waste collection, he managed to survive thanks to loans, collections and public functions organized his friends. In addition, with the justification that he had been sanctioned, he was denied veteran’s pension, a false argument, because as we said before, the Cerro Assembly recognized his ranking as a General retroactively. Faced with such a critical situation he chose to participate in politics. In 1899 he accompanied Juan Gualberto Gomez in an attempt to organize the veterans of the Eastern Province. All roads closed and in 1906 he joined the so-called Liberal Revolution of August with a small group of men, against the reelection of Don Tomás Estrada Palma.

In that contest he was the first to initiate combat actions: He raided the Havana-Guanajay train, attacked and seized weapons and supplies in several villages of La Habana. Once the armed attempt failed, from his camp he sent a letter to the authorities for safe passage out of the country. The answer was the order to assassinate him. Four bullets and seven machetes ended his life. According to the forensics, he died of accidental injuries.

The only thing we must understand, said Juan Gualberto Gómez, is that without freedom there can not be equal brotherhood. And the truth is that at the time of the assassination of Quintin, there was no economic life, culture, nor consciousness of a common destiny, defining elements without which we can not consider that a human group has become a nation. And Fernando Ortiz said: “Without the black Cuban there would not be Cuba.” He could not therefore be ignored. But sadly for all Cubans, this ignored problem has not yet been resolved definitively.

His promotion to General was an example of black participation in the Liberation Army, and his murder, a symbol of the injustices in the Republic. After he died he was placed in the pantheon of martyrs and his figure was manipulated by political parties of the time to rally the black vote, which as we know, were more than a few.