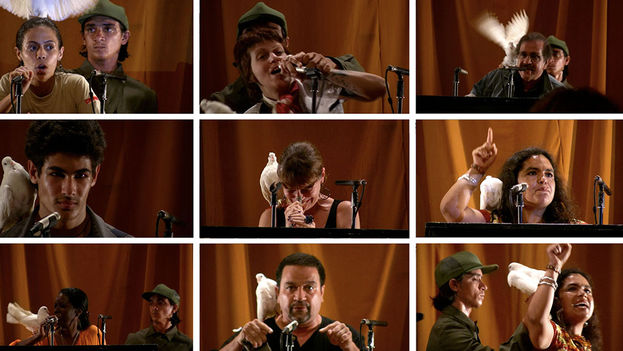 14ymedio, Tania Bruguera, Vatican City, 18 December 2014 – First of all I congratulate you because a historic moment is what is always expected of political men and this moment has been 17 December 2014. You have entered into history by arguing that the embargo/blockade is an apparently empty word, by changing – with the reestablishment of diplomatic relations – the meaning to 53 years of politics defined by one side (U.S.) and used by the other (Cuba), to politicize Cubans’ daily lives, wherever they may be. I wonder if this gesture is also a proposal to kill ideology. Cuba is now defined starting not from death, but finally starting from life, but I wonder, what life and who has the right to these new lives?

Today as a Cuban I demand that you let us know what your plans are for our lives, that you establish as a part of this new stage a process of political transparency were we all have a space to participate and the right to have a different opinion without being punished. That when we have to deny many of the things that defined us, this process doesn’t come with the same intolerance and indifference which, up to now, has accompanied the changes in Cuba, where acceptance is the only option.

Today as a Cuban I demand that there be no privileges or social inequality The Cuban Revolution has distributed privilege as a reward for a sense of trustworthiness, which is synonymous with fidelity to those who are in the Government, or on its side. This has not changed. Privileges have defined the social inequality that we have experience since forever, an inequality that was clothed in Revolutionary meritocracy and that today is transformed into loyal entrepreneurship. I demand that the material and emotional rights of survival of those who may not want to be part of this new stage be defended.

Today as a Cuban I demand that we not be defined by the markets, or the use that the leaders can make of us. I ask for equality for that Cuban who, due to the blockade/embargo gave his life, for example, working in a factory to proudly arrive home with the title of Labor Hero, and who today has no place in the world of foreign investments and can only aspire to a retirement defined in socialist times and not in these times of the market economy. What is the plan to not reproduce the mistakes of the other countries of the former socialist camp? To not turn us into the Cuba of 1958? To repair the emotional abuse that the Cuban people have been subjected to under the politics of recent years. To ensure that there will be social and material justice? To ensure that we will not be a colony nor that we will have to unquestionably accept these benefactors as it happened before with the Soviet Union and with Venezuela?

Today as a Cuban I demand to be able to demonstrate peacefully in the street for or against a government decision and to be able to reclaim political and social rights, without fear of reprisals. That associations and political parties with points of view different from the official be recognized. That civic activism, civil society and those who have a different point of view be decriminalized. That political parties born from popular desire be legalized. That direct elections be established where all parties can participate and that ideological differences be resolved with arguments and not with acts of repudiation.

Today as a Cuban I reclaim the right to be political beings, not just economic entities or tokens of symbolic exchanges to make history.

Today as a Cuban I want to know what is the idea behind the nation we are building.

Today as an artist I propose that Raul put the work Tatlin’s Whisper #6 in the Plaza of the Revolution. Let’s open all the microphones and let all voices be heard; that it not be just the clatter of the coins we are offered to fill our lives. That the microphones not be kept off. That we learn to do something with our dreams.

Today I would like to propose to Cubans wherever you are that you take to the streets this coming December 30 to celebrate, not the end of the blockade/embargo, but the principal of your civil rights.

Let us make sure that it is the people who benefit from this new historical moment. The motherland is what we grieve.