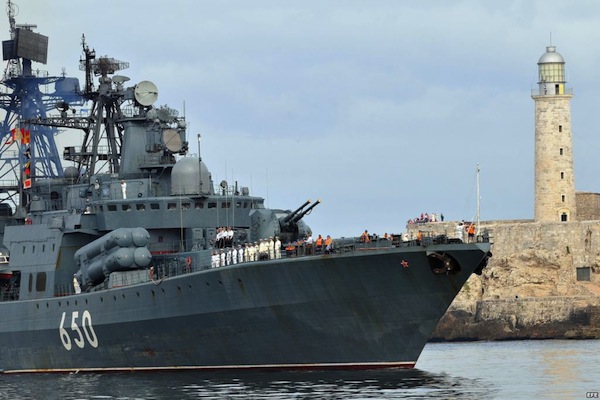 HAVANA, Cuba.-The crucial dispute in which the geopolitical, economic, and military interests of major world powers are played is the most relevant one in escalating individual conflicts that have been taking place in other regions–the Syrian and Venezuelan crises are two examples–perhaps of lesser effects globally, but where hegemonic interests also have some influence. Thus, in numerous media, alarms have gone off heralding the Cold War, an old ghost which many believed had been banished.

The term “Cold War ” was coined during the late 1940s to define tensions of multiple natures (economic, political and ideological, military, scientific, technological, etc.), that characterized the relations between the communist bloc, under the aegis of the dominant USSR, and the capitalist, led by the U.S., after the end of World War II.

The ongoing power struggle between the two axes to achieve global hegemony constituted a permanent threat to world stability and peace, branding many of the major events of the second half of the twentieth century up to the time of the elimination of the Berlin Wall (1989) and the disappearance of the Soviet Union (1991).

The US bloc and its allies had won the game; however, tensions between East and West have never really been overcome. Currently, competing interests go beyond the ideological aspect that defined that almost 50-year span, but the global threat of conflicts between the powers remains intact.

Meanwhile, those countries under the influence of the super powers continue as test sites in the show of force of world power centers, and also as blackmail scenarios of the worst of dangers, just as the 1962 Russian nuclear threat against the U.S. from the Cuban mainland. No wonder, then, that the mere mention of the Cold War can be a source of apprehension to many Cubans, especially now, when there are surges of the unmistakable signs of intentions of using our region, and in particular, our country, as platform for Russian imperialist expansion in this hemisphere, in full defiance of the U.S.

At first glance, it might seem that the Russian intervention in the Crimea, the Russian arms sales to Venezuela, and the presence of a Russian spy ship in Havana, are unconnected events. However, declarations by the Russian Defense Minister, Sergei Shoigu, about their intentions to open military bases in Venezuela, Nicaragua and Cuba (in the latter case these would “reopen”), information which was not published by the Cuban official media, show that Mr. Putin, seasoned in intrigue and sordid affairs since his days in the KGB, is ready to step up the tone, moving his historical adversary’s line of dispute in Latin America which, despite everything, remains an American sphere of influence.

Meanwhile, “leftist” governments in this region are sounding the alarm against “Yankee Imperialism”, but at the same time they meld alliances with the Russian Empire, whose importance might not be wise to underestimate, despite its post-Soviet era of decline, while others remain indifferent to these events.

Thus, Russia, with its culture and history completely unrelated to ours, and with a lack of traces in our national emotional memory, today has the enthusiastic connivance of the same old Cuban conspirators and their regional disciples, and the acquiescent silence of our Latin American brothers/step-brothers.

For Cubans, such a plot could not be taking place at a worse time, when the military power cast holds the monopoly of the economy, and the gerontocracy has been consolidating its international political legitimacy–though not its prestige–thanks to the collusion of governments that met in late January at that aberration called CELAC, and of other international organizations that decided to give the Havana regime a boost, thereby increasing the defenselessness of Cubans against the power’s game for political gains.

For now, some Russian entrepreneurs have begun to invest in sectors of economic interest on the Island, such as tourism, and reportedly also in the Special Development Zone in Mariel, indicating that Cuba remains a point of strategic interest for “the Northern Bear”, the only empire that, at a time when it was Cuba’s “ally”, at the goriest time of the Cold War, placed us in the epicenter of what had the potential to become a global conflagration which, in a matter of minutes, could have wiped us from the face of the earth.

It is terrifying to remember that there were Cubans back then, to whom the government denied the existence of those dangerous Russian artifacts on Cuban soil, who, immediately and massively, got up “in arms against the US imperialist threat”. Such a sad paradox, the enemy was, and continues to be, at home.

More than 50 years later, the scenario is different but some facts are repeated, creating–due to lack of information–the most diverse speculations. The same irresponsible government retakes up the affair with its former allies, perhaps with the collateral intention of indirectly pressuring for the repeal of the U.S. embargo, among other possible plans. Concerns abound, because, if the first part of that forced marriage was bad, we can bet that a second part could even be worse.